Under a Rogue Moon (MF)

When werewolf hunter Flanna McRae allows a single wolf to escape from her monthly hunt, the last thing she expects is for him to come after her. But fellow hunter Jason Randolph is convinced otherwise. His months-long hunt of the Romm pack has led him straight to the doorstep of her quiet English home. He doesn’t care that his quick-witted charm seems to get under Flanna’s skin. All he wants is to finally get his kill.

Until Flanna manages to get under his skin as well.

Their explosive affair is inevitable, but with the full moon less than three weeks away, Flanna’s convinced they are living on borrowed time. Romm is deadly and relentless, and it’s going to take more than the passion Jason inspires to stop the werewolf from destroying everything she cares about. Or is it finally enough? 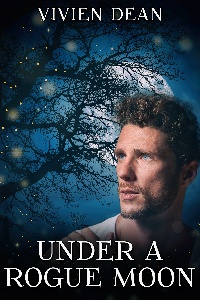 Under a Rogue Moon (MF)

“Did your father train you?”

“Yeah,” she admitted. “He picked this house especially because it had the barn he could use for his weapons and the like. What about you? Is hunting a family thing for you, too?”

Jason chuckled. “Only if it’s got money at the end of the trail.” He was suddenly standing right in front of her, blocking the way out of the barn. “I’ve gotta ask because I’m dying to know, and it’s probably going to make things worse, but what the hell. Why is it you don’t like me?”

Nobody could leave her speechless quite like Jason Randolph. Her mouth opened, closed, open again as her mind searched desperately for some kind of response that didn’t make her sound even more foolish than she already felt. In the end, the best she the best she could manage was, “Excuse me?”

“It’s not that that’s not OK,” he went on. His eyes were twinkling, and his mouth was twisted into a half-smile, but underlying his joviality was a note of disappointment. “It’s just ... well, that’s kind of a new one for me. I mean, people don’t usually start disliking me until they’ve had a chance to really get to know what a jerk I can be, and I haven’t been around here long enough for that to happen with you. So, I’m asking. What is it about me that rubs you the wrong way? My devilish good looks, or my sparkling personality maybe?”

The question bothered her. Not because he was asking, but because she suddenly felt like she’d been caught out on something, a child with a shameful secret forced to share it when she really didn’t want to. Her cheeks blazed in embarrassment, and her hair seemed suddenly too heavy down her back. But Jason wasn’t moving from her path. If she wanted to get by him, she would have to resort to being physical, and that would just be wrong on far too many levels. She didn’t have much of a choice but to give him some kind of answer.

“You joke too much,” she said bluntly.

His head cocked in amusement, his eyes narrowing slightly as they regarded her. “So ... you have a phobia for funny?”

Her flush deepened. “I just don’t think it’s always appropriate,” Flanna said. “You make light of things that I wouldn’t. What we do ... it’s serious business, and it looks like you treat it like it’s not. I don’t care if my father or Guillaume or Tony Blair himself thinks you’re God’s gift, but I think you’re going to get yourself killed. And ... enough people die already.”

“What you’re saying, then, is that you’d miss me if I wasn’t around.”

“What? No! Stop twisting my words!” Whirling away, Flanna began to pace the length of the wall, doing everything she could to keep from looking at him. “This is exactly why I don’t like you. You always say just the wrong thing, and it’s ... it’s ...”

She hadn’t realized she was moving so close to him until his hand shot out and curled around her bicep, forcing her to a halt.

“You accused me last night of being emotionally invested in getting Romm,” he said. Something dark flickered behind his eyes. “You were right. But if I went at all this with the same seriousness you do, I would’ve slit my wrists a long time ago. This is who I am, Flanna. This is how I don’t explode.” He paused, and she felt the slightest of caresses along her arm where his thumb began to stroke it. “Kind of like how you go to places like Rage.”

Her skin was burning beneath her sleeve where he was touching her, and her throat was dry, refusing to work properly in the face of his casual reference to her night in New York. “You don’t know anything about why I went there,” she whispered.

Jason shook his head, the strokes along her bicep growing stronger in tiny, almost imperceptible fractions. “I think I know a lot more than you’re willing to admit.”