Hillie is a kind-hearted Golden Retriever. But one night she goes missing. Her overnight companion Blue, the family’s Great Dane, limps home in the morning ... but no Hillie.

The family finally traces her to a doggie cell at the local police station and is horrified to discover she is accused of killing and maiming sheep. How can sweet Hillie have suddenly turned so vicious? And why is there no blood on her mouth from all that murdering?

The mission is clear: absolve Hillie from all blame. 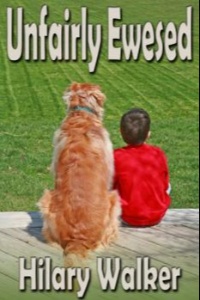 She ended up phoning the local police. They said they had an animal which fitted Hillie’s description, and “if Madam would like to come down to the station ...”

I’d never been inside a real police station, so I went, too. It was pretty boring, like a small post office with chairs in a dull yellow room and a counter at one end. Nothing like on American TV, where you’ve got tons of cops pushing handcuffed guys around. There was just a chubby man at the front desk who told us he was Constable Picket. We could see the dog they had in custody in a minute, but there was just one small thing to be discussed first. Mom immediately said, “When the police say ‘small thing,’ it’s usually a big thing.”

“Well, madam, if this is your dog, she was brought in by a farmer who caught her chasing and killing his sheep throughout the night. Apparently she and another dog --” Mom dug me in the side with her elbow as I was beginning to say something about Blue. “-- spent the night harassing his flock.”

“But that can’t be!” Mom exclaimed. “Hillie’s the sweetest dog that ever lived!”

He led us outside and down stone steps to a row of tiny prison cells. They were about four feet high, with three sides and a ceiling in brick, and bars on the front. They were all empty except for one.

Mom and I looked at each other. Poor Hillie sat at the back of the last cell and, as soon as she saw us, she came bounding to the front, wagging her tail and expecting us to take her out.

“I take it we have the right dog, madam?”

“I’m afraid so, Constable. Could we take her home now, please?”

“Well, I’m not at liberty to let her out yet. We have to take her picture and assign her a number.”

“What, a mug shot, like a regular prisoner?” I asked.

I must have looked too excited, because he said, “This is a serious business, young man, and your dog has behaved in a criminal fashion. So, yes, she has to be treated like a regular prisoner.”

“Wow!” I was thinking what a great story this was going to make at school on Monday. “Are you going to take side views and a front view, with a number tag hanging round her neck?” I needed all the details.