Wards of the Women

Wards of the Women introduces three desperate girlfriends who, on the surface, appear to have it all, but underneath are in the midst of various crises. Mysterious deaths, extortion, straying husbands and illegitimate children have suddenly overtaken the lives of Violet Christianson, Shayne Wentworth, and Fifi Gentry. Eventually, when Violet becomes fed up with all of their circumstances, she does what any sensible woman would do—blackmails the state prison warden into letting each of them buy an inmate from the jail for their own personal fulfillment. But never in their wildest dreams did they imagine all the chaos that would ensue from a simple little purchase. 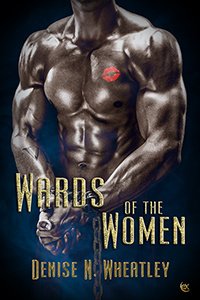 Wards of the Women

Violet Christianson was a woman who knew what her name meant to most. Perfection. Everyone either wanted her, wanted to be her, or simply wanted her to go away.

Violet considered herself to be the most beautiful woman on her block and never missed an opportunity to ponder her stunning image. At five-eight, she kept her lean size two figure draped in outrageously expensive designer clothing at all times. Her dazzling, widespread hazel eyes were framed with long, lush lashes. Her retroussé nose had finally been perfected after several invasive surgeries. Her soft, plump lips accentuated high cheekbones when they puckered. Her raven hair swung so low that she could practically sit on it.

Violet’s husband, Elliot, was rich. The richest man on the block, to be exact. Elliot worked as a real estate developer and closed more big-money deals than most. As a result, he allowed her to spend his money on whatever she wanted, and whenever she wanted. As he should have, considering how unsightly he was. Elliot’s pockmarked skin, hair plugs, bifocaled eyes, rat-like teeth, pot belly, and squat body were enough to send most into hysterics the moment they laid eyes on him. But Elliot was wise enough to hide his ghastly appearance behind his vast fortune. So by the time people noticed his looks, they’d already been so blinded by his Benjamins that his ugliness became a blur. Which was exactly how he said he wanted it.

Violet’s house was big. The biggest house on her suburban block, to be exact. It boasted a huge great room, six bedrooms, eight bathrooms, an Olympic-size pool, and even a room designated just for gift wrapping. The house had been designed by Jacques Lolique, interior decorator to the stars, which meant that her contemporary décor was nothing short of flawless—as was the house’s appearance, which was constantly being serviced by a small army of workers.

To top it all off, Violet was smart. Smart enough to have earned a doctorate in psychology. But rather than open a high-end practice and service the rich and famous, she’d gone with her heart and decided to work with inmates at the local state prison.

Violet Christianson. Beautiful, lucky, and charitable. All the reasons why most people either wanted her, wanted to be her, or simply wanted her to go away.

Shayne Wentworth loved how the mere mention of her name brought smiles to most faces. She knew she might not have been the most beautiful woman on the block, but she certainly was the sweetest.

Shayne was an ex-pageant queen. Ex, simply because she now had five beautiful children and a wonderful husband to look after. If it weren’t for them, she could certainly still be competing. Because, after all, when she looked at herself, her bright-green eyes still danced. She made sure her straight white teeth still gleamed. And her creamy, clear skin still glowed. As for her shoulder-length platinum blonde locks, all she’d have to do was pull them out of the bun that she usually wore and shake it out a bit. As for her figure, all it would take was a crunch or two to get back in fighting shape. And as for the rest? Nothing a tube of lip gloss and a dazzling evening gown couldn’t fix. So, all things considered, she was still a contender.

Shayne’s husband might not have been the richest man on the block, but he certainly was the most powerful. Russell worked as a criminal defense attorney and had a reputation for being ruthless and cutthroat. At home, however, he was a different man. Russell was a gentle pussycat who worshipped his wife and doted on his children. He allowed Shayne to stay at home while he worked to provide for the family. Which was good for her, considering she knew nothing beyond the world of pageantry.

Shayne might not have had the biggest house on the block, but the one she did have was bursting with energy. Her sixteen-year-old son, Matthew, was following in his father’s star-studded footsteps by playing football at Russell’s high school alma mater. Her fourteen-year-old daughter, Sloane, was a straight-A student who’d managed to skip two grades and was taking accelerated courses in high school. Her twelve-year-old son, Ryan, already knew he wanted to be an attorney, so he spent every possible moment with his dad at the law firm. Eleven-year-old Cadence was carrying her mother’s torch by competing in statewide beauty pageants and winning numerous trophies and prizes. And Basil, Shayne’s ten-year-old son, was simply brilliant. His wit, intellect, and cunning sense of humor amazed all who knew him.

Shayne Wentworth. Nurturing, fortunate, and fulfilled. She might not have had the best on the block, but at least she had her family.