Warm and Soft as Firelight (FF)

Princess Noemi's brother is betrothed to the crown princess of a neighboring kingdom, an alliance with a stronger nation in exchange for the magic that runs in Noemi's family. When Noemi's brother dies unexpectedly, there's no other male of the bloodline to offer, and the alliance is in danger of dissolving. But the court magician has an experimental spell he says will allow two women to produce an heir. Thus it is Noemi who finds herself married to Princess Caterina.

Noemi is fascinated by the kind and beautiful Caterina, but feels certain her feelings can never be returned. What does she have to offer except social ineptitude, a bad temper, and a mediocre appearance? How could Caterina ever want her instead of her lost brother?

But when an accident threatens Caterina’s life and only Noemi’s magical talent can save her, they may find they have more in common than they ever suspected ... 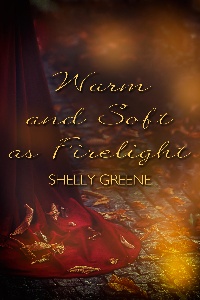 Warm and Soft as Firelight (FF)

In the king’s salon -- a respectably opulent chamber sporting gold trim, velvet furniture, and frescoes of angels, all of it currently draped in black -- Noemi found not only her parents and the Cassavelans but, inexplicably, Brinza’s court magician, Raffaele.

“Now we are all together!” Raffaele exclaimed. “Come, Your Highness, sit.”

Raffaele was a peculiarity, a handsome young man whose flamboyant and breezy manner would not have flown at any court stricter than Brinza’s, however powerful his magic. His surname and origin were a much-speculated mystery. Noemi had always liked him; he smiled at her now, as she settled onto a divan beside her mother.

“Well, out with it, Raffaele,” Noemi’s father said. “Why have you requested this audience?”

Raffaele had requested the audience?

“Because Your Magnificent Majesties -- all four of you -- and a smattering of Highnesses besides -- have a complex and colossal problem and I,” he spun and turned it into a bow, his multi-colored cape flaring behind him, “have the solution.”

“Cassavelas,” Raffaele said, opening a hand toward Caterina and her parents, “wants Brinza’s noble and unusual magic in their bloodline. Brinza,” gesturing now at Noemi’s parents, “wants Cassavelas’ power at their back. Thus the marriage of Princess Caterina and Prince Pietro, God rest his soul. But now all is dismay and grief, because with the loss of the prince, there seems no way for either kingdom to get what they so desire, despite the other’s willingness to give it! Caterina cannot marry Pietro.” Raffaele turned and in a courtly, elegant, and somehow kindly motion, opened both hands at Noemi. “She must marry Princess Noemi instead.”

“You have always been a man of nonsense,” Noemi’s father snapped, “but now you go too far.”

“This is a waste of time,” said Caterina’s mother.

Noemi had turned to look at Caterina, who was looking back, eyes round with shock. Noemi herself felt, along with the shock, a strange lift of emotion, something hopeful and thrilled. Doubtless because the alliance might be salvaged.

“A woman marry a woman?” Noemi’s mother looked baffled. “That is not how marriage works.”

“This would not even solve the problem,” said Caterina’s father. “For Brinza, I suppose -- yes, very clever, you would still have a marriage alliance with Cassavelas -- but without any chance of providing us with magic-gifted grandchildren!”

“That is not how marriage works,” Noemi’s mother said again. “It could not possibly be valid before the law.”

“As far as the law,” said Raffaele, “is it not yours to declare? As for grandchildren, of course I would never have proposed such a thing, without having the solution.” He whipped a small case from his pocket, flipped it in the air, and withdrew ... a pair of little cowrie shells, each hung on a fine chain.

“These,” he said, “are charms of a sort I invented for a man and wife who could not conceive a child even after many years together. Under usual circumstances, a child is created by, shall we say, an act of love between bodies. With this magic, the act of love between two souls substitutes, and is then translated into the realm of the body.”

Noemi hardly realized she and Caterina were still staring at each other until Caterina dragged her eyes away to peer at the shells.

“Meaning -- not to be indelicate -- that if the wedded wives engage in marital conduct together, as an act of love and not merely of lust, conception will in fact be possible.”

“But how are they to do that? Two women ...” Noemi’s mother looked utterly mystified.

Raffaele, who was in competition with Noemi’s male cousin for the heart of Duke Travina’s son, gave her a look equal parts impatient and pitying. “I’m sure they can come up with something.”