Silke, an easy-going German who prefers dodging problems to facing them, follows her job to the US when her bossy, longtime partner Alex refuses to start a family. Once in Texas, the cute blonde, who fixes medical analyzers for a living, is hit on by coworker Ana, a voluptuous and sexy Latina, who falls head over heels for her.

Ana, formerly content with casual hook-ups, recognizes a good thing when she sees it and will do whatever it takes to win Silke. Still in love with Alex despite her shortcomings, Silke strings Ana along while at the same time getting increasingly chummy with her landlady, Lauren. The frumpy nurse is middle-aged and motherly, and best of all hetero, which makes her safe for Silke to hang out with. Or so she thinks.

A kiss initiated by Lauren changes everything and they eventually become lovers. But Lauren has always struggled with putting herself first, and when her husband and daughter return home for the holidays, she resumes her wife-and-mother persona. Ana, on the other hand, is not only free, she is ready to start a family now and doggedly continues to pursue Silke. Of course there’s also still Alex, sophisticated as ever and used to getting what she wants, which is to keep Silke.

Deceiving everybody and most of all herself, Silke procrastinates until being playful doesn’t cut it any longer. Can she take a stand and save the relationship with the one person who truly matters? 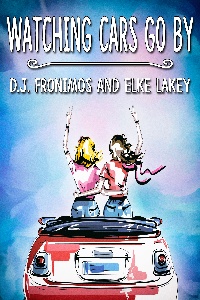 Silke followed the woman into the hallway past a padded bench. A mirror hung above it and between that and the door was a wooden plaque with several hooks on it. A leash was draped over one of them. A doorway on the left led into a bright, open room with a couch half-covered by a blanket. The dog immediately jumped up on the couch, made a few circles, then settled himself on the blanket, closing his eyes.

“Not so scary now, is he?” Lauren patted the sleeping dog on the head. “This is the living room, which of course you'd be welcome to use.”

Silke flinched just a little. Cozy nights in front of the fire? Pretending to be focused on the room, she surreptitiously looked the woman over instead. Scratch middle-aged. This lady was not only younger but also prettier than the horrible Ruth who had made Silke that abominable offer. Also, there was nothing predatory about Lauren, as she quite obviously had not bothered to fix herself up for Silke’s visit. No make-up, hair that hadn’t seen a salon in quite a while, and a nondescript red top that didn’t even fit her well. And those awful jeans. No, Lauren looked exactly like what she probably was, a housewife wanting to bring in a little bit of extra money. But she did have a nice smile. Nervous as it was, it reached all the way to her eyes. Quite striking eyes, actually. They were a deep green with golden brown flecks in them. Plus, they somehow seemed familiar.

“It has a nice view of the street, if you like watching cars go by.”

Watching cars go by? Having spotted her rental out by the curb, Silke pivoted around to look directly at Lauren, who, rather than kidding, appeared to be dead serious.

“Em, ja, of course. Sounds, em, nice.” What the heck? Nobody in their right mind would be doing that. Having deemed Lauren harmless only a few minutes ago, she was now seriously wondering what was wrong with the woman.

“Sorry, I'm afraid there's just not a whole lot of excitement on this block. What sort of things do you enjoy doing, anyway? We're not too far from a movie theater, library ... or maybe you like outdoorsy things? There's a nice park with nature trails a few blocks over.”

Taken aback, Silke shot her a hard glance. After all, she just needed a room, not someone to run her life. But Lauren looked so guileless and was so earnestly trying to please, Silke simply had to revise her impression.

“What I like to do? Hm, let me think.” Rainy Sunday mornings in bed with Alex. With nowhere to go and nothing to do but ...

“It must be pretty boring here for someone from Europe. I mean, Texas is okay, almost never rains, which I hate personally, and of course there are always festivals going on of one kind or another, but I imagine things are pretty strange to you here. How long do you plan to stay?”

“A year. For now,” Silke added in case the woman preferred a long-term renter.

“I'm sorry. Just let me know if I ask anything that's none of my business. As I told you, I've never done this before. You'd probably like to see the room before you commit to anything.”

“That would be nice,” Silke confirmed the obvious and let the woman lead her to the prospective rental.

The room was smaller than what the lecherous couple had offered, but it had a feel to it that she immediately liked. While a far cry from the sleek look Alex favored, the furniture was at least light-colored, and even though things matched a little too much for Silke’s taste, it was subtle enough for her to add her own personal touches. It felt airy, too, and with the sunlight streaming in from between those mauve curtains ... Slowly Silke turned around in a circle with Lauren’s somewhat anxious glance following her, but when first one car and then a second car drove by, Silke allowed a grin to spread across her face. When Lauren saw that, her tenseness immediately diminished and the next thing Silke knew, they were smiling stupidly at one another.