As the 10th Annual Million Dollar Malibu Tequila Surf Off nears, Malibu is in a state of panic and it’s up to Dr. Jennifer Ferguson, head of the privately-funded Shark Understanding and Awareness Center (SUAC) to put their minds at ease. With a NAVY Seal’s background, a Ph.D. and a life spent studying the feeding behavior of sharks, Jennifer struggles to prove the attacks are isolated – and unrelated.

Surf shop owner and local legend Slade Kane isn’t so sure. He’s been surfing for four decades and knows a pattern when he sees one, even without all of Jennifer’s fancy credentials. When he’s approached by the paparazzo who took the shark-attack picture, the two agree. Something’s fishy in Malibu. And it’s twice as big, twice as aggressive, and twice as deadly as anything they’ve ever seen before. 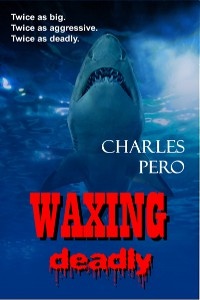 A nudge tested the bottom of his board, dead center. He felt it deep in his sternum, an unnatural pounding from below that signified strength he couldn’t imagine—and didn’t dare calculate. He held his breath, willing the nudging to stop, but only feeling the pounding again, harder, on the left side of the board.

It was like when a seal gets trapped beneath the ice and pounds against the top layer with its nose until, at last, he finds the hole again. Brody’s body lifted, he heard the board slap back down onto the ocean’s surface, and he knew it was only a matter of time before the thumping kicked back in.

Too soon he felt it again, the board lifted up and out of the water and he lost his balance, listing to the right and slapping into the Pacific. His torn and slashed fingers scrabbled for purchase but were too slippery and bloody to grab the slick top half of the board. He tried to scramble back to the board, flailing against the salty ocean, the saline stinging his wounds, but a vacuum of teeth and jaws sucked him in before he ever got the chance. It wrapped around his torso with such viciousness he was nearly cut in two before being spit out again.

Even before the killer silenced him forever, Brody felt his connection with the ocean sever completely. That was what hurt the most. The fact that what he had loved so much had betrayed him. His last thoughts were of all the waves he’d never catch, all the saltwater he’d never smell or taste, all the life that had been robbed of him. What took it, he had no idea, but even Mother Ocean herself was not strong enough to save him from the hell born demon ripping him limb from limb.