What The Gods Allow

Medusa, the Gorgon, is free—temporarily. Penned up in Tartarus, the gods—Zeus and Hera—show her mercy. Medusa is given two weeks in which to track down their wayward daughter, Eris. Transformed into a beautiful young woman, Medusa is given only one warning: not to use her powers of transforming those to stone.

She agrees and adopts the name Meddy Gorgonne. In a stroke of chance, she finds lodgings with the Goldstein’s, Sam and Trudy, and tries to figure out how modern Portland works. Cars, showers, television—all are mysteries to her at first, although she adapts.

Meddy is somewhat naïve about life and especially about love, as she slowly falls for Sam, a teen who is suffering from Usher’s Syndrome, a disease that will blind and deafen him in time. What is more troubling to Meddy is that her powers of turning people to stone have returned, and she is at a loss as to why.

With the police slowly closing in and time running out on how to get Eris to return to Olympus, Meddy discovers that sometimes old is new, and that time-worn traditions can surmount modernity.

But will they be enough for her to stay with Sam, or will she be forced to return to Tartarus for eternity? 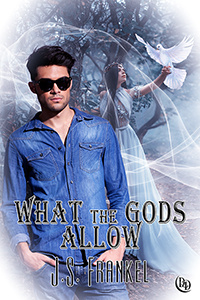 What The Gods Allow

Four words, four precious words that she’d longed to hear for millennia untold. “You are getting out.”

Medusa raised her head off the cot and glanced around her jail cell. Roughly twelve-by-twelve feet, it was made of stone ten inches thick. The stone was impenetrable and ages old, so old in fact, that the only thing that marked the passage of time were the scars she’d clawed into the wall centuries ago.

The door was just as solidly constructed as the walls. A cast-iron job seven inches thick with only a tiny slit to allow some light to enter, it took a massive effort by the guards to open. In front of the door was a plate-sized triangle that she’d scratched into the stone a long time ago. It was for a game called Delta that she played when she was bored or had free time.

In Tartarus, nothing but free time called. It became a test of her ingenuity to stave off boredom. She’d used a couple of pebbles and a medallion she’d found as game pieces, and had gotten to a level nothing short of expert.

However, that ability hadn’t done her much good in this place. Tartarus was a place where justice was meted out by the gods. Any other skills went unnoticed.

“Prepare yourself,” the voice said.

The command came from Aeimnestus, one of her jailers, and he actually sounded happy. Happiness was an unknown commodity here. The other, Stavros, had never been as nice. Aeimnestus, at the very least, was civil. She asked, “May I speak?”

Her voice came out rusty, as if it hadn’t been unused for a long time. Thinking about it, it was true. Speaking was forbidden here. It was only allowed when the jailers precipitated it, a rare occasion, indeed.

“I am coming,” she said, and swung her legs over the edge of the cot. Her bare feet, horned and twisted, felt the roughness of the floor, as well as the cold.

However, the cold didn’t bother her. The calluses on her soles were more than an inch thick, tougher than leather, and almost as impenetrable as the iron door to her cell.

Medusa was more monster than woman. It took one to make one, she thought with no small amount of bitterness. Born in a small, unnamed village in northern Libya, the spawn of monsters, the brother and sister duo of Phorcys and Ceto, she was a Gorgon.

Her body, green and scaly, was no less hideous than her face, also scaly. Her eyes glowed a horrid red, and she had snakes for hair that constantly moved. At least, they had when she was alive. Now, they lay limp on her head.

Her body was that of a young maiden’s, barely past the age of seventeen, the age at which she’d died. Lithe and slender though she was, the fact that she had claws instead of hands, as well as horned feet, marked her as someone who could hardly be called human in any way, shape or form. Aeimnestus then asked, “Do you need water?”

She observed her clothing and sighed. It was a chiton, a long, plain robe. Woven from either wool or linen, it was what most women of her era had worn. In her youth, she’d sometimes worn a himation, a kind of cloak, but only when it was cold. Otherwise, her chiton served as an all-purpose body wrap.

As for time, what did it matter? There were no timepieces here, no sundials or ways to tell how much time had elapsed. She had no knowledge what season it was, or even what hour it was.

In her day, the months of Libya, where she’d spent the first few years of her life, and later on, Greece, were hot and dry for the most part. Here, the cell was dank, and mold had formed on the walls. In an evil miracle, it had never spread, but it remained there as a sign of never-ending decay and rot.

She had no need to use the toilet, as her body—that is, her spirit—had ceased to function as a mortal’s would. Now, like all the other prisoners of Tartarus, she merely existed as a shadow in order to serve out her term.

The door opened with a creaking sound and a dull light flooded in. It made her blink, and she shielded her eyes until they adjusted. It had been a long time since she’d seen the actual sun. Even with its diminished power, this unholy light was still strong enough to make her wince.

“I am here,” Aeimnestus announced.

Dressed in the garb of a Hoplite soldier, he stood with a bucket in his right hand and a bundle of clothing in his left. “This is for you to wash yourself,” he added while depositing the bucket inside the cell.

He then handed over the clothing. It was a fresh chiton, a dull white, and he laid it next to the bucket. “Please change. I will avert my eyes.”

Quickly, she shed her rags and washed herself all over. While she may have been only a spirit, a shadow, in another macabre twist of magic or some power she couldn’t fathom, her sense of smell was unimpaired, and she stank.

Unlike the water from the river Styx, which smelled horrid, this water smelled fresh. As she began to wash, she sniffed the air. The smell of a billion crushed animal innards, the scent of death and decay, and the odor of ugliness and anger and hatred all combined to create a stink most foul. It permeated the air and the walls of her cells. Like the mold, it never left.

“Hurry,” Aeimnestus said with a note of urgency. “Zeus does not like to be kept waiting.”