Where Our Treasure Lies

Cattle rancher Emily Williams lives and works in a small Colorado town and loves it. Though she came out west to search for diamonds in a fabled lost mine, she has found more success in her pastures.

Then Carson Murphy arrives in town, sent by his mining company. Tall, strong, and sure, he becomes a beacon of hope for the townsfolk—their best chance to locate the lost diamonds.

Many have searched for the mine, but none have succeeded. Emily has little faith but joins Murphy anyway. The glittering allure of wealth proves too powerful to resist, and the straightforward Murphy attracts her just as much, if not more.

Hardworking, determined, and eternally hopeful, Emily, Murphy, and the town persevere through life on the frontier. They search the lonely hillsides for the answer to their burning question—will they ever find where the treasure lies? 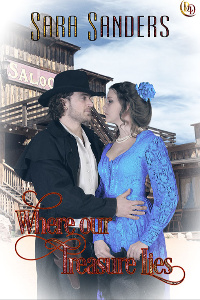 Where Our Treasure Lies

WHOOO-EE! Drink that rotgut, drink that red nose,
Whenever you get to town;
Drink it straight and swig it mighty,
Till the world goes round and round!

The loud, drunken men of Diamante Hills made the walls of the saloon resound with their song. They filled every available seat of the barroom. Many stood or leaned at the bar that spanned the back wall. Some stood around the piano to the left of the bar beside the back staircase. Others sat on the steps, lounging and laughing. But most relaxed at the tables that filled the rest of the large room. The tables were simple wooden circles and the chairs unadorned. All were speckled with stains from years of use. As they moved to the music, one man on the stairs sloshed some beer out of his mug, adding another dark puddle to the mosaic on the floor.

Emily Williams didn’t sing along, but she did raise her mug along with everyone else and cheered at the song’s end.

“Drink up, ya ugly bastards!” someone shouted from the bar.

The men in the saloon erupted in laughter.

Laura’s eyes were smiling, but her face was stern. “Who’re you calling ugly?”

Abram Holt bowed low from his place at the bar. “Terrible sorry, milady. What I meant to say was ugly bastards and beautiful angels.”

The men cheered again. A few whooped and whistled.

Emily raised her beer once more. “I’ll drink to that!”

She and Laura led the room in a long, frothy draught. She brought her empty glass down hard upon the table while Laura took another moment to drain her beer.

“You ladies need a refill?” Sam asked from behind the bar.

Emily shook her head. “No thanks, barkeep. I might be the only one in this establishment that remembers, but we’ve got a cattle drive at the crack of dawn tomorrow.”

“What do you think we’re celebrating for?” one of the men shouted. Raucous laughter and cheering followed. When these men drank, they’d cheer for a rock.

Emily shrugged. “Just remember, if you aren’t there, we leave without you. There’s a substantial bonus for any man that goes on the drive.”

“Yes, ma’am, boss,” Holt cried, raising his mug. The inevitable cheering momentarily drowned out the sound of someone starting a new song on the piano. Soon the entire saloon was singing along.

Emily went to Sam and handed him a few coins.

“You don’t owe near this much, Emily,” he reprimanded.

She shrugged. “It’ll cover the mess, then. Take care, Sam.”

Laura winked at Sam, and he looked away. Emily and Laura turned and headed for the door, weaseling their way between tables, chairs, and bodies.

Emily slipped her hand through the crook of Laura’s arm. As they passed through the door and into the cool, quiet night, she asked, “Why on earth do you torment that poor man?”

Laura tossed her hair and laughed. “Because I’m young and I’m pretty and I like to be noticed. There’s no harm in it, Emi. He’s the most faithful husband there is. His wife has him wrapped around her little finger.”

Emily rolled her eyes. “If that woman were any less good-natured, she would have come after you by now.”

“Ah, but I choose my targets wisely. Never pick a fight you know you can’t win.”

“Or bat your eyelashes out of.”

“Most likely that,” Laura agreed.

Emily regarded her friend. Laura was a little high on herself, but she certainly wasn’t wrong. She was a gorgeous woman of twenty-six with long, thick, soft blonde hair that fell to the center of her back. She wore it up during the day, but on nights like this she preferred it long and wild, as did the men. She was devoted to her beau, Daniel Watson, but she liked to keep her admirers on their toes.

Laura had no lack of smarts, despite what most assumed, and shared many little tidbits of wisdom she’d picked up during her hard life. She ran the Diamante Hills equivalent of a brothel, though, in truth, it wasn’t nearly so barbaric as that. She simply ran a boardinghouse for the young single women of the town, who she called her ducklings, and turned a blind eye when they made their rent by not-so-savory means.

After all, who was Laura to judge the world’s oldest profession? She’d made her fortune selling herself.

Laura had arrived in Diamante just two years before Emily. Back then, Diamante Hills had been a small muddy collection of three or four buildings surrounded by a legion of tents. A legend had resurfaced of diamonds being found in a hidden cave years ago by the Spanish. The most desperate and gullible miners had slowly trickled into town to try to find it. They had nowhere else to go, left bereft after the Colorado Gold Rush faded away.