Where the Bodies Lie

by Cindy A. Matthews

Zonta survived the Turn Over at Gentle Acres, a communal project she helped design alongside her late husband. Her life as a master gardener is fulfilling, but she feels something is missing. The answer comes when a Protector enlists her to keep an eye on Jake, an agent of the Authority. Zonta can’t deny her attraction to Jake, but can she love an enemy while protecting all she holds dear?

Jake decides his assignment to the wasteland of Gentle Acres is more than worthwhile the minute he sees the beautiful and exotic Zonta. When he tours the commune and meets the people, he is certain the peaceniks have nothing to do with the two agents he is searching for. As Jake learns truths he never knew, he concludes that perhaps his dedication to the Authority is wrong.

Can Jake prove himself to the Protectors and his new lover? Can Zonta risk losing her home and another lover to the Authority? 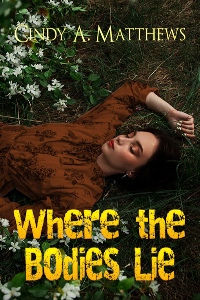 Where the Bodies Lie

by Cindy A. Matthews

Zonta scanned the ripening corn swaying in the midsummer’s breeze as the blazing sun edged below the western horizon. The earthy scents of growing things made her smile. Gentle Acres was indeed a fitting name for what they had created collectively out of the aftermath of chaos.

They should feel pleased with their efforts. Zonta felt immense satisfaction, considering all the obstacles and setbacks she and her neighbors had overcome in the last decade. The communal garden was by far the most successful project she had ever been a part of or had ever hoped to be involved with. It was all the more bittersweet since she had taken the journey alone.

I wish you could be here, David. It’s what we’d dreamed of doing oh-so-long-ago when we were young and naïve, and the screwed-up world seemed to hold the slightest possibility of redemption. Too bad the Turn Over put an end to our dreams, huh?

“In a minute,” she shouted back. “I have to do the nightly check off first.”

“Okay, but don’t be too long. Elise really wants to try out her new marshmallow recipe along with our chocolate substitute and Daphne’s homemade graham crackers.”

Zonta hopped off the rusting tractor seat and headed toward the small aircraft hangar they now used as a communal barn and storage facility. They all had come a long way from the early days of horror and deprivation. Her garden helpers deserved all the summer fun possible not declared illegal by the Authority.

Zonta shuddered. They’d have to catch us first. But what isn’t illegal for us lowly Have Nots? We’re fortunate the Haves can’t be bothered with our gardens and our bonfires and leave us in relative peace.

As if the cosmos read her mind and its desire for tranquility, a familiar shadow crossed her path. She halted.

“Hello, Daniel. Long time since your last visit. What’s up?”

Zonta groaned and threw up her hands. “Why am I not surprised? It’s not like you usually come to help us with the crop harvesting or fruit picking.”

She turned and stomped into the hangar-barn, Daniel following closely behind. From the unwashed smell that lingered in his vicinity, it was obvious he’d been on the road for some time. Sleeping rough, most likely, unless he’d been able to bunk at one of the neighboring communes in their region.

Daniel, the thin, scruffy twenty-something with haunting eyes and peach-fuzz cheeks, was the child she’d never had and probably never would have. They walked in silence past the various chicken coops and pens that held the community’s small menagerie of livestock. She knew he wouldn’t speak openly until they were inside her make-shift garden office with the door closed.

In the gathering dark, she turned on her solar-powered battery lamp and placed it on the old metal desk. Daniel looked unkempt and unfed as usual, adorned in a torn-at-the-neck t-shirt that was stained with dirt, sweat, and God knew what else. His threadbare-at-both-the-seat-and- knees jeans and duct-taped high-top sneakers completed the ensemble.

Zonta shook her head, but she didn’t judge him, because his outfit was totally in keeping with post-Turn Over fashion for the Have Nots. Her own cut-off jeans and faded tie-dyed top possessed more patches than original cloth. It was high time they did some trading with the Scavengers for new clothing stocks.

An unusual air of nervousness about Daniel was apparent in his pacing. Zonta intuited that all was not well. She frowned and sat down at the desk.

After a few moments of mutually tense silence, she spoke. “Oh, come on and come out with it, Daniel. What’s up? You’re not one to beat about the bush.”

“Funny you should say so, but I have been—beating about the bushes, metaphorically, as Daphne likes to say.”

He paused his pacing and looked her straight in the eye. “We’ve scrounged up everything we needed to complete our surprise. The dream has become a reality.”

“All of it?” Zonta raised an eyebrow. She hadn’t really believed that what the Protectors had been scheming for more than a year was possible, but stranger things had happened in her lifetime. “So, it’s set to go?”

Daniel nodded. “The shitty thing is that our friends to the North shared some intelligence with us, saying that the Authority could be onto us.”

Relief washed over her. She sighed. “You’re calling it off then?”

“Not necessarily. The Authority could be just acting out their usual paranoia. They may not make the trip as they planned, and all our recent hard work has been for nothing. So, that’s where you come in. Your help might be necessary.”

Zonta clenched her fists in her lap. “I thought you were going to say something like that. You want us to help out the same as last time, don’t you?”

Daniel shrugged, his bony shoulders practically poking through the thin material of his filthy shirt. “Possibly. Word has it that the Agency is sending someone more knowledgeable, not someone like the complete bastards they sent before to check us out.”

He leaned forward and rested his hands on the desk edge. “Do you think you could handle it? Keep the Agency off our backs while we work on the finishing touches? Make them think we’re friendly natives?”

Zonta bit her lip. “I don’t know. I won’t know until I try. Does Jefferson know about this development? Any of the others on community council?”

“Nope and nope, but I’ll talk to Jefferson soon. I’m not sure anyone else on the council needs to know. It’s probably better that they don’t.”