Joe and Spence are coworkers, and friends with benefits, whipping it out from floor to floor. But when Joe declares that he wants something more, will the ultimatum turn the lusty tide? 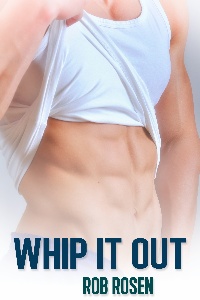 Fuck buddies, that’s what we were. Well, something along those lines. Though that’s not what we did -- fuck, that is.

It all started innocently enough. We were at one of those work-related, team-building camps, somewhere out in the middle of the woods, amid the trees and all that fresh air that my city lungs couldn’t quite grow accustomed to.

There were ten of us and one outhouse. Not a good ratio, not by a long shot. That first afternoon, I had to pee, and the hut was occupied, so I hightailed out into the woods to find a wide pine tree to hide behind. Only, I didn’t go far enough. Joe, a coworker of mine, had the same idea. He approached from my left and stood a few trees over from me.

“This sucks, Spence,” he lamented. “I can think of a million things I’d rather be doing on my weekend than pissing in the woods.” I laughed and nodded my agreement, still with my fingers locked on my zipper. Joe waited and then asked, “What, are you pee shy? Go ahead, whip it out.”

I wasn’t pee shy, actually; I just felt weird exposing myself to someone I worked with, especially Joe, who was, and this is a gross understatement, hot as all hell. He was tall and lean, dark and handsome, scruffy and wickedly sexy. In other words, whipping my dick out in front of him could prove, um, embarrassing.

In any case, he started to pull his out, so I did the same, trying hard not to stare. Trying, naturally, and failing. We both sent a stream out against our respective trees at the same time, filling the otherwise silent forest with the sound of our mutual pissing.

I coughed. Joe looked over. “Hey, Spence, you getting a chubby over there? A woody in the woods?”

My cheeks burnt a painful red. I looked up and over. “No, I, um ...” I stopped cold. Yes, my cock was semi stiff, but his was as thick and hard as the tree he was pissing on. “Oh,” was all I could think to say.

“Yeah, oh,” he replied. “Something about being out in the open like this, kind of gets my juices flowing, so to speak.”

“Same for you, I guess.” Then he upped the ante. He unbuttoned his jeans and slid them down to his sneakers, revealing well-muscled, hairy legs and a giant set of balls beneath all that thick meat. “Mind if I, you know, pull the pud?” he asked.

“You can whack one off, too, if you like,” he interrupted.

The thought was appealing.