Wickedly Ever After - An Anthology of Retold Tales

Something wicked this way comes–and this time, wicked is going to win.

Villains are the heroines and heroes of their stories and in this anthology they are going to be the leading players–and finally find love. In these 10 stories you will find villains from fairy tale, folklore and myth. From the familiar to the fantastic. From Hades to Grendel.

A man who gets more than he expected by binding himself to a selkie,

A woman who discovers the loveable Beast in the young man she once knew,

A mermaid who is not meant to be with a prince,

A witch who has so much more to offer than a cabin made of sweets,

A singer who has promised something she cannot deliver and gets help from an unexpected source,

And more. If you’ve ever rooted for a witch, an evil fairy or a wolf, this anthology is for you. 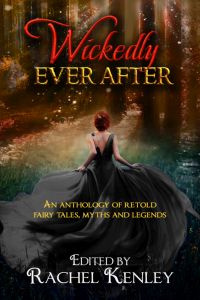 Wickedly Ever After - An Anthology of Retold Tales

Tom hadn't gone out that morning with the intention of stealing a selkie pelt. If he had, he would have walked down to the ocean. That was where the selkies were, after all. Sometimes he saw one, bobbing in the water like a cork before ducking back under the waves. He knew it was a selkie and not just a seal when they waved at him or blew a raspberry, and as they disappeared, he heard the very beginning of barking laughter. They weren't usually dangerous, the selkies, but they weren't terribly polite either….

All that morning he turned an old problem over and over in his head, worrying at it like a sore tooth. Life would be so much better with a wife. His only living child had recently married, and she no longer had time to help her father with his little scrap of the world. She had her own scraps to look after now. Three years really alone, and nine since his wife had died, and he was feeling the ache of long loneliness. He could cook and clean and forage and fix and mend and tend well enough to care for himself. Hadn’t he finished raising Jess on his own? But with a wife, the winters would be warmer. The work would be lighter. He'd have someone to talk to, someone to share his little victories. He longed to be touched, and touch in return. But he had never been beautiful, even in his youth. Now there was gray in his peach-colored hair, and his eyes crinkled whether he was smiling or not. And there were so many fewer smiles. He had a small home and not much else in the world to his name. The only things to recommend him were an honest nature, most of the time, and a kind heart, but to the right person, maybe it would be enough. Couldn't that be enough?