When his boss’s twenty-year-old son announced he wanted to be more than friends, Tim Kammerling told him no. He wasn’t ready to have a relationship with someone more than ten years younger than him. Devin knew he couldn’t stick around Napa and honor the status quo, however. He left town, and the two became long distance friends instead.

A lot can happen in eighteen years. Letters are sent. Calls get made. 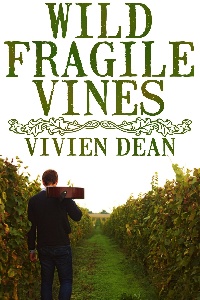 The voices drifting from the living room are new. All of them are here by invitation, but his jumpy nerves mean they offer noise, not comfort. It would be different if they were at work. At the Mayer vineyards, people surround him, family, friends, coworkers. Everywhere he turns, someone is there with a smile or a word, unknowing anchors in the life he deliberately set out to create for himself. The first time he’d met Devin, for instance, he’d thought he was simply another pin in the pantheon.

But Devin is the perfect example of chaos theory in motion. If Tim had bothered to believe the stories he’d heard about the younger Mayer son when he was hired, he might have figured that out before it was too late.

Someone knocks at his door, and he shoves the box back into the drawer a fraction too hard. “Who is it?”

“Heidi. The water’s boiling on the stove. You want me to take care of it?”

He remains frozen for several seconds, waiting for another query or commentary about what’s taking so long. Heidi means well -- they all mean well -- but he’s too on edge to face them yet. He’s not sure what could possibly go wrong, but he feels like a sapling caught in the middle of a wind tunnel. Only the irresponsible would plant something so fragile in the threat of destruction.

His fingers tighten on the drawer handle. No backing out. He’s already made that promise. He doesn’t have the desire to break it, except in the rare instance like this one where everything he thinks he’s known seems like a distant dream. He’s always been so careful. Meticulous, Mr. Mayer said after his first week of work. Pat had been less flattering when he took over, though it hadn’t been out of malice. Besides, even Tim can’t take a man seriously who uses the word “persnickety” without any sense of irony.

For Devin, he was the embodiment of heart and soul, but when Tim protested both the romantic connotation and the intent behind it, Devin refused to budge.

“You turned this place around.” Tim could still see the way the sunlight had found all the natural tawny highlights in Devin’s dark hair as they stood at the edge of the west field and gazed over the growing vines. “You love watching it all grow, and you’re willing to work crazy-ass hours to make it happen right. People see that. It inspires them to push themselves harder. You’re pumping out what it takes to make the machine work, and you do it out of love. If that’s not a real heart and soul, I don’t know what is.”

He’d dismissed Devin’s words as an artist’s fancy, proof of his musician’s spirit, but they hadn’t disappeared as he expected. To this day, they linger. Devin might as well have written them down like his letters. Tim can’t forget any of those, either.