Feeling disowned by her family, Belle isn't exactly feeling chipper for the holidays. Her girlfriend Julie has a plan in mind, however, and hopes it'll be the right surprise to bring a smile back to Belle's face. Who wouldn't love a wintery get-away at their favorite childhood place: their family farm?

But what should be a time for reminiscing and digging up holiday cheer is well, not exactly what they get. Not when Julie's friend Hector, her partner in surprise-making crime, shows up. Belle, already in a sensitive place, begins to question their relationship.

Will Julie's attempt to brighten holidays succeed or fizzle? 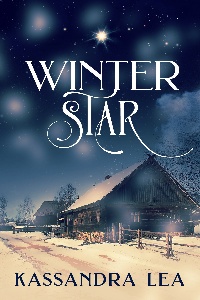 Julie fished her cell phone out of her pocket to see if she might have missed a message, but the screen was blank. Not a single notification.

"Sorry," apologized the man she'd been waiting for, the only man she'd ever allow to keep her waiting. Hector Leeds plopped into the chair across from her, tufts of red hair curling out from underneath his knit hat. The ginger tendrils almost matched the rosy hue of his freckled cheeks, his light green eyes sparkling. Like everyone else in the city, he was dressed in warm clothes, but still lacked the telltale signs of someone fighting against the bitter winds of winter, no coat or scarf in sight. The brunt of winter had yet to arrive after all. "I tried to get away earlier; my boss had other ideas."

"Better late than never," Julie spoke the old adage. From the pocket of her hoodie she withdrew a package of chocolate-covered crackers that Hector loved. She slipped them across the table in his direction.

Hector arched an eyebrow. "Is this a bribe or...? What's the reason for this?"

"Reason?" Julie shrugged. "Since when do friends require a reason to hang out with each other?"

"I appreciate the offer," Hector said. He picked up the treat, the wrapper crinkling under his touch. "Still, you said there was something you wanted to discuss, so what's up?"

To stall, Julie sipped her beverage. She'd known Hector since grade school, lucky enough to give him the label of best friend from the day she'd gotten his comic back from a bully. They'd weathered many milestones, and he had been the first one she had come out to on her fifteenth birthday. If she ever found herself wishing for male companionship, which was highly unlikely, Hector topped the list. In other words, if she could trust anyone with a dilemma, it was the man staring at her now.

"Well, you know how Belle and I wound up crashing at your place for Thanksgiving?"

"Kind of hard to forget. It was just the other day, after all, and you," he said, pointing at Julie, "made one of your divine cakes."

Julie laughed lightly. "Box cake, Hector, with a few tweaks, that's all it was, but thanks."

"I think our impromptu, thrown together meal was c'est magnifique." Hector kissed the fingertips of one hand. "Besides, it was an excellent excuse to take a break from my start-up."

He had a point: the crazy whirlwind of events that brought them to his apartment door had led to a great night of food and laughter. It wasn't exactly what any of them had planned, but it certainly turned out perfect. Aside from the fact she had to listen to some friendly ridicule about her steadfast desire for cranberry sauce, the sort that came in a can and was all weirdly jiggly.

"And I can't thank you enough for letting us take over your night."

This time it was Hector who shrugged. "What are friends for? My dinner plans consisted of a frozen turkey dinner and a beer. You two made things better." He broke off a corner of the cracker. "I still don't see why we're here. You already thanked me."

Julie sighed, rubbing her arms and averting her gaze. A touch of melancholy seeped into her mood, the pleasant memory diminished. "I'm here because of Belle. It's bad enough her parents ditched her for Thanksgiving in order to visit her pregnant sister." At the mention of Belle's sister, Julie shuddered. "Now they're going to be gone half of December, maybe even the big day."