I’ve been pulled from the only home I’ve ever known. I’ve been called the Queen of Freaks.

I’ve been attacked and killed.

Yes, I know how that sounds.

I’ve been forced into hiding, captured and imprisoned but by far the worst thing, the thing that tops all that, is being told that I have to fight the sister I didn’t know I had.

I know what you’re thinking. Siblings fight all the time, right? Well, not like this. When you find out you are a magical twin all the normal family rules fly out of the window.

One of us won’t make it out alive.

Meanwhile, my sister has been training for this day all her life while I just found out a couple of weeks ago that I have a twin and we’re meant to kill each other.

But Celestria doesn’t plan to make things easy on me, and my father is on her side. With my family and friends risking their lives to save me, I only have a few days to train and learn everything I can to survive. 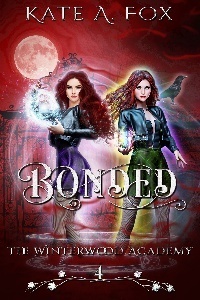 “If I told you that there was a way to get help from outside the Academy, would you be able to drop the wardings?”

Booth’s face dropped, a look of defeat shadowing his face.

“Booth, we need to get out of here before the next shift of guards comes along,” lecturer Tomas hissed under his breath as he began down the corridor towards them.

“Even if I had an entire coven of witches behind me, I’m not sure our combined magic would be enough to take her on,” Booth replied to me, once more ignoring Tomas.

“There is one thing that could help you do it,” Emelia spoke up for the first time from her cell, and I felt my cheeks begin to burn with embarrassment.

My mum had just heard Booth practically professing his love for me, not to mention the fact I’d shot him down.

“The Winterwood Book,” she and I said almost in unison as if our minds had melded together.

“You have it?” Tomas’s eyebrow raised as he came to stand beside Booth. He looked at me curiously.

For a moment, I thought that maybe I should lie. He was, after all, one of Celestria’s Sons of Helios. But then I saw the hopeful look on Booth’s face and reminded myself that if Tomas really was loyal to the Grand Priestess, why had he allowed Booth down here?

I shook my head and sighed deeply. During my pacing of my cell I’d looked desperately for my duffel bag but there wasn’t really any place for it to be hidden save for under the bed or the bucket in the corner that I really didn’t want to think about.

“But you did when you arrived on campus?” Tomas asked, his face thoughtful.

I nodded. A lump formed in my throat at the thought of where the book might have been, most likely in the cruel, disgusting clutches of the one woman I was determined to keep it away from.

“The priestess has it.” Emelia’s voice was matter-of-fact. There was no fear or even disappointment in her voice, just fact. “She pried the bag from you as the warriors carried you down here.”

My hand flew to the neck of my t-shirt and swept down until I felt the cluster of gemstones that nestled between my breasts.

“At least she doesn’t have the key.” I sighed with relief as I wrapped my fingers around the pendant. It began to feel warm in my hand, almost as if power was pulsing through the stones and out into my palm.

But there’s no magic down here? I thought even as my mother breathed a sigh that mirrored my own.