After the end of a bad relationship and the death of his dog, Geoffrey is left with a choice: live the rest of his life alone or start over. But starting over is easier said than done, and alone in the woods one night, Geoffrey writes those very words on a rock.

To his surprise, when he returns later, he discovers someone has replied. The lengthy written conversation that ensues over days leaves Geoffrey less lonely, and also quite hopeful and intrigued about the future and the identity of his mysterious new friend. 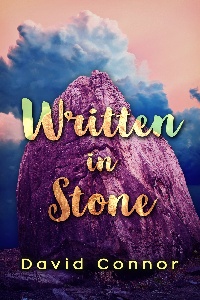 Why can’t I start over?

Geoffrey Driscoll scratched his head with one hand as he fumbled with the chalk in his pocket with the other, the same chalk with which he had written the original question on the big rock down by the stream in the woods. Geoffrey’s grandmother had once told him it was tradition in her homeland to write wishes on rocks that would be granted by loved ones gone from Earth. Geoffrey didn’t know if that was true. His grandmother was born in Massachusetts just like he was, and he couldn’t find much about such a practice online. Geoffrey didn’t really believe in wishes anyway. Still, he jotted down the occasional musings and news of big events there, where he and Max had spent some of their best times; stuff like being approached to create the score for a Broadway bound musical called Starting Over. “Ironic, huh?” Geoffrey had said to the sky about that one.

It was a legitimate question, and Geoffrey wondered who had left it as he caught his fifty-year-old reflection in the water at his feet. “I look so old,” he told himself. The sun was bright, and though the water was rushing from a night of torrential rain, there was a still section -- a pool -- created by a jam of big limbs and a barrel-sized trunk brought down by a windstorm years back. It had already changed in shape and size over time, and would someday get unstuck, Geoffrey knew, as time and nature affected it. The metaphor wasn’t lost. Life went on.

Geoffrey’s huge Bergamasco, Max, used to play in the water after a long walk around the meadow. Max had dreads like Whoopi Goldberg which took forever to dry, but the fun was well worth the effort. Their special place was open to the public yet eerily quiet most days, save for the chirping birds and buzzing bees. During fishing season, Geoffrey might see a dad and son with rod and reel setting out on their very first expedition or a group of teens more interested in the beer they’d snuck than whatever they might catch. Otherwise he might go weeks without running into another passerby, except for the young twenty-something couple with matching Min Pins who often appeared just as Geoffrey and Max were heading off. The rather attractive pair usually offered simultaneous nods, to which Geoffrey would mumble “Good morning,” while looking at the ground. They may have been lovers, but just as easily could have been siblings for all he knew. Maybe they were identical twins. That was how little attention somewhat introverted Geoffrey paid to anything but their shoes. Maybe he’d ask them some day. Maybe that day. But probably not.

Why can’t I start over?

Geoffrey was a 2014 Tony Award nominee for Fuzzy Yellow Socks, a musical about comfy transient footwear that drastically altered the lives and relationships of those who took possession. The bad news -- Geoffrey didn’t win. The good news -- John Travolta wasn’t the star selected to introduce the powerhouse leading lady who performed “Pamper Your Tootsies,” one of the more risqué tunes from the production. Geoffrey’s latest project had him thinking about new beginnings for himself, through characters like a middle-aged man who loses his job after forty years, a soldier just back from Afghanistan, a woman in recovery, and one trying to bounce back after a series of devastating losses. That one was Geoffrey.

Geoffrey and a younger, handsome hunk Ryan had met at an animal shelter. They had both made a beeline for the same cage and somehow immediately clicked. Though Ryan had graciously stepped aside, Geoffrey, thirty-seven at the time, had agreed to let him visit Max anytime. They sort of raised the pup together, first as friends, then friends with benefits, then partners. Max even served as a witness -- though not legally, of course -- when Geoffrey and Ryan rushed to the courthouse the moment Massachusetts legalized same sex unions. Good times -- the three of them had enjoyed quite a few, some right where Geoffrey stood.

Geoffrey brushed a tear from his eye, his back against the rock and its words, and did some quick math in his head. One walk in the morning and another at sunset, two times three hundred sixty-five totaled seven hundred thirty walks per year. Seven hundred thirty times thirteen equaled nearly ten thousand jaunts through wildflowers, crunching over autumn leaves, or trudging through winter snow, carefully navigating patches of ice with Big Max. One time, Geoffrey slipped and fell. Max showed his concern by plopping his one hundred-twelve pound body atop him and licking his face. Fortunately, Ryan had been there to help. The last time Geoffrey went down, on a warm, clear summer night, no one was, and when Geoffrey held Max in his arms as the beloved canine companion took his final breath, he was alone then too, because Ryan was already gone.

Geoffrey had been somewhat of a late bloomer. Starting at thirty-seven was somewhat difficult, as Geoffrey worried about his lack of experience, at least when compared to “Randy Ryan Wright,” as Ryan’s sports buds called him. Now, with gray peppered throughout his hair, deep lines and creases on his face, his gut far less taut than it had been when he’d first hooked up with Ryan, a miserable failure at the only real relationship he’d ever had, Geoffrey found the notion of starting over at fifty damned well daunting.