Yaliana is a warrior who guards the compound on the planet of Harr from dangerous animals. It is her duty to ensure that the citizens who live in the compound are kept safe. She thinks her life will always stay the same, but one day the boss' daughter goes missing. It also looks like she is somewhere in the jungles of Harr, a dangerous place to be.

Yaliana would do anything to save Ulissa, but the more she learns, the more it seems that Ulissa didn't go missing, she ran away on purpose. Yaliana is caught between her duty to her boss and her love for Ulissa.

Then, the mission to recover Ulissa doesn't go as planned, and Yaliana and Ulissa must face the dangers of Harr together. 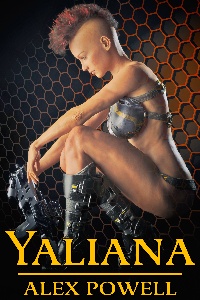 Yaliana and her squad stepped forward, and the shadow of the trees loomed over them. Yaliana stepped into the forest first, feeling a prickling on the back of her neck as she did. They were being watched by hostile forces already. Yaliana urged her yak forward, and her squad followed.

The group stretched out into a line along the probable direction of Ulissa's journey and began their search. The knights had to take out their sabers to slice their way through, making a trail. They trekked far into the jungle, and eventually, the thick vegetation blocked the view of the compound walls. All around them, the trilling of birds and hum of insects filled the air. Calls of larger animals sounded once in a while, reminding them that they were not alone.

A group of creatures that reminded Yaliana of dogs of some kind scattered at their approach. The compound didn't have dogs, but pictures of them portrayed their likeness to these creatures. Normally, they would have defended their territory, but the sheer number of knights made it too risky for the creatures to attack. What were they called again? Yaliana couldn't help but think that Ulissa would probably know their proper scientific name.

As they walked, more and more animals avoided their path. Bird-like animals swooped by overhead, nothing but a blur of grey-brown in the low light. The foliage had closed off the sunlight from view, and the farther into the jungle they progressed, the darker it became.

"There's no way she could have made it this far," Besry said, shifting her feet, clearly uncomfortable with being outside the safety of the compound walls.

Yaliana pursed her lips. She felt a steady ache in her chest at the thought that Ulissa was in danger, and it was unimaginable that she could be dead. It was impossible.

"She might have," Yaliana said with a certainty she didn't feel. "We owe it to the boss to make sure."

"The jungle is so thick; she could be anywhere," Gevery said. "How could she have made it through without a weapon to slice a path?"

"She wasn't wearing our armour, so she could have made it through," Yaliana said.

"There's been no sign of her at all," Besry said.

"It's only been a few hours," Yaliana said. "Let's continue on."

"The next compound over is a seven-day trek through rough terrain," said Gevery. "She can't have imagined that she would actually make it there alive."

"She must have, or she wouldn't have tried," Yaliana said.

"We've barely made a dent in this forest," Gevery said. "How long before we give up?"

It was hot going, and Yaliana sweated inside her armour, muscles aching, even with the help of the power running through the mechanized metal suit. Her helmet stopped her from wiping sweat off her face, and she shook her head to try and stop it from running into her eyes.

It had been hours when Yaliana found it-an empty ration package. Ulissa must have dropped it accidentally. Yaliana held it above her head in triumph and a shout went up and down the line. The news travelled fast, and Yaliana felt her hopes rise. It was possible, then, that Ulissa was alive. Her heart pounded, and her spirits renewed. Ulissa was smart, much smarter than a lot of people she knew, and if anyone could figure out how to survive in this deathtrap, it was her. All Ulissa had to do was survive until Yaliana found her, and everything would be fine. Hope fluttered within her breast, and she smiled widely. They hadn't found Ulissa yet, but it was a start.

Before she could gloat much over her find, someone screamed from the other end of the line. Their short celebration must have disturbed some creature. Yaliana couldn't see what it was, but she heard the crashing and shaking of trees. It must be a large animal to be able to move through the thick vegetation.

A moment later, even louder crashing sounds erupted, and then the creature was in sight. It was about fifteen feet tall, with thick scales covering its body. The creature had a horn on the front of its head, like a rhinoceros of Earth, and was similarly proportioned. The one difference were the jagged rows of teeth inside its jaw.