Borderland is the story of a young assistant bank manager, Logan Massey. She discovers hundreds of thousands of dollars missing from several elderly customers’ accounts while meeting with the daughter of one of the customers, Travis Morton, who has recently died. The missing money can be traced to an unscrupulous lawyer with an expensive cocaine habit, Jake Turner. After he is confronted with the evidence that will ruin his career and send him to prison, Jake commits suicide while in a drug-induced state. He crosses over into Borderland, which is the residence of the afterlife, and blames Logan Massey for his demise and the circumstances that follow. Desiring revenge, he comes back to earth determined to force her to kill herself and join him in the bowels of Hell. In the meantime, Travis Morton arrives in the afterlife and becomes an inhabitant of the Light, the higher elevation in Borderland. His assignment is to be a spirit savior, helping to prevent wicked souls like Jake Turner from wreaking havoc and placing innocent lives in danger. Along the way, others cross Jake’s path and some die in his evil quest for reprisal. Logan escapes her self-induced guilt over his death by taking a trip to her deceased parents’ cabin on the lake. She meets some very nice local people, including a kind, handsome county veterinarian named Tom Doherty, who helps her and faces danger in the process. The ultimate battle for Logan’s soul brings earthly and spiritual forces together in the peaceful isolated confines of Brown County State Park. When the struggle is over, who will win, good or evil? And, what will be the final destination and judgment for Jake Turner’s soul?

About the Author:
Jennifer Seet is the author of Borderland and Snow Signs. Both are fictional paranormal thrillers set in the hills of southern Indiana. Jennifer is a retired teacher from the Indiana School for the Deaf who lives in Brown County, Indiana, with her husband, Bob. She has always had a fascination for, and even some personal experiences with, the spirit world.
Mrs. Seet has also written professionally on the subject of Deaf Education and Autism, having two adult sons with Autism. While working at the Indiana School for the Deaf, she wrote several short stories for a federally-funded literacy project for deaf children. Since retirement most of her writings have been the two books and several short stories, both fiction and non-fiction, for The Realm magazine. 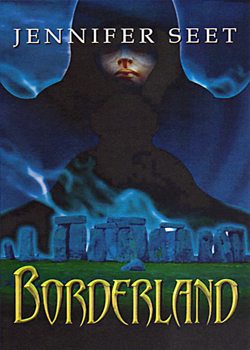