Two gifted, good-looking opera singers, from different cultures and opposite sides of the track in Texas, discover that falling in love is wonderful. But love may not be enough if it interferes with their dreams of success in the ruthlessly competitive world of opera. D.J. McKay's dream of singing in European opera houses clashes with his rich daddy's prejudices against such a "sissy" career; his obsession with beautiful Eva Villalobos doesn't sit well with his socialite mother, either. Meanwhile, Eva strives to help her poor family financially by achieving success on the stage.

So what happens when their passion for each other thwarts their dreams? How can their relationship survive three-thousand miles of separation? Will their ambition to succeed kill the only true love they have ever known? 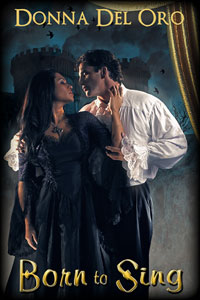 Prof Nits held up a finger in the midst of his earnest conference with David, his leading baritone. I'd dated David a couple of times and luckily for me, there wasn't any physical chemistry between us. We were good friends and I wanted to keep it that way. I didn't need any complications in my life, certainly didn't need a Casanova like D.J. McKay screwing things up for me. I had to stay focused to get through this difficult senior year. Beyond June, the world of professional opera awaited. So I hoped, anyway.

"Eva Villalobos, why are you ignoring me? I think we should kiss at the end of this number. Are you with me or not?" D.J. growled gently, a sly twinkle in his deep blue eyes.

Until the professor hushed up the class, I had no choice but to respond to this skirt-chasing, wannabe leading man.

"Fine, fine, whatever. Just don't overdo it, okay? No tongue, for Pete's sake."

He leaned over me, his face inches from mine. "Huh, kissing you'll be like kissing cold marble. What they say about you is true, you're an icy, prissy prude with a bug up her ass--"

I gasped, flattening myself against the side of the piano to escape him. Brad snorted a short laugh and started tinkling the keys, honky-tonk style. He broke into a burlesque version of "Some Enchanted Evening".

D.J. was turning this rehearsal into a personal grudge-match. Fortunately, no one else but Brad seemed to notice.

"Vain and vulgar, too," I retorted coldly, lifting my chin, "A gabacho."

He stuck his face into mine and lowered his voice. His eyes were angry slits. I wanted to punch him in the face.

"Don't talk Mexican with me. I know what gabacho means. We've had Mexicans working for us for years. I hear your daddy raises dirt and your brother raises the tooting kind of grass."

D.J. was imitating a guy taking a marijuana drag. Now incensed--no one impugned my family's dignity without a fight although most of what he'd said was true-- I squinted up at this offensive upstart, laying on the country drawl as thickly as peanut butter. He was making fun of me but I'd never bow under the hurt that lanced through me just then. So my parents were hippie farmers, barely ekeing out a living raising hay, a few stud horses and Mexican donkeys on their sixty-five acres. So what? So I subsisted on a scholarship and two part-time jobs and wore three year-old, torn jeans and tee shirts most of the time. So what? So I was a Latina hick-from-the-sticks, so what?

I lifted my right leg and began swinging my foot threateningly.

"You back off and apologize, D.J., or so help me, I'll turn you into a falsetto. I was raised with a mean older brother so don't think I can't aim a good kick."

He widened his eyes in mock terror but did withdraw a foot or two. His expression changed in a flash, from smug to contrite. I think he'd seen how much he hurt me.

Well, that surprised me. Insulting me was his way of coming on to me? If he used that ploy with all his girls, how'd he get such a reputation as a lady-killer?

"Save your breath, Mr. McKay. I wouldn't take food from you if I was skin-and-bones starving," I drawled dulcetly.

Not too soon, Professor Woronicz called the class to order. A minute later, D.J. and I were Christine and Raoul, pledging undying love and devotion. In full character, we gazed into each other's eyes, holding each other lightly, his hands on my upper arms, mine barely grazing his chest, alternating singing our lyrics.

We ended together, blending the melody together with our very different voices in double harmony, singing: "Anywhere you go, let me go, too. Love me, that's all I ask of you."

I stayed in character a moment longer, entranced by Christine's and Raoul's love and heartfelt words of devotion. Christine believed it with her whole heart. She could trust Raoul and love him for all eternity. He was the man for her, the love of her life. Staring into his blue eyes, I knew Christine could have no other man. In his face, Christine saw her own joyous love reflected there. And so, in complete rapture, Christine and Raoul came together and kissed. The kiss lengthened and deepened. My arms encircled his neck, his tightened around my waist. I closed my eyes and surrendered to the sensual fog.

I stopped thinking as Christine and returned to myself, but the music still resonated deeply inside me. A lovely, stirring melody. This man tasted lovely, too. His mouth was smooth and warm and wet. We didn't French kiss but rather explored each other's mouth gently. His hard, lanky body fit mine like a perfectly contoured glove. We were both tall and slim, long legged. The way we fit together was like two puzzle pieces, interlocking hardness and softness, almost as if we were made to fit together. I felt I could stay this way forever…then I remembered who I was and what I was doing. I was kissing NOT RAOUL…BUT D.J. MCKAY. Everything I despised and resented in my little, biased worldview.

Ever so slowly, like emerging from a drugged sleep, I heard the prolonged silence, which was suddenly broken by resounding waves of laughter. I ended the kiss and pulled away, not before recognizing the stunned look on D.J.'s face. A flush burned through his tanned cheeks. My own head and neck were on fire.

"Well, that'll work," Prof Nits remarked matter-of-factly to the class as the laughter subsided, "We've found our Christine and Raoul. Though this interpretation, I must admit, is a bit--what did you call it, D.J.?--over the top."

More laughter. "Now, ladies and gentlemen, let's rehearse the 'Masquerade' number…Everyone on stage. Hank, come over and block this number for us. Frank, the music…"

D.J. and I were still holding each other by the arms. Absolutely stunned. Shocked, we jumped away but our eyes never left each other's faces. He looked stricken and surprised, like I'd slapped him without warning. My head felt like the top of my skull was going to blow off. My heart was beating a mile a minute. My ears were ringing.