In Chapter 7, Brandi’s Best Revenge, the crew of the Pulsating Purple Parsnip encounter their time bandit contact in their own dimension—Robin’s ex-girlfriend, Marian Maidenform. But all is not quite as it seems aboard Marian’s ship, and seducing the hunky android Andrew becomes part of Brandi’s revenge against the cold yet sexy woman who broke Robin’s heart. But what does K.R.A.P.P. have to do with the balance of power on Old Terra? Brandi and her pals are determined to find out. 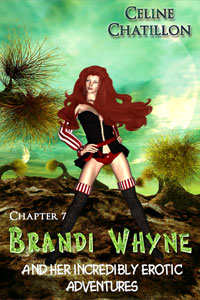 “Nice to see you again, uh, Marian,” Scarlet Willie mumbled. He hurriedly gathered up his clothing and began to dress. “Long time no see. Now, if you don’t mind, I’ll return to the bridge and let you all discuss matters in pri—”

“Not so fast, Commander Dickinson,” she interrupted. “I recall you were never one to stand on form, so why start now?” She raised a perfectly arched black eyebrow, her gaze lingering on his cock, making mental note of how difficult it was for our second-in-command to put on his hose with a hard-on growing.

No denying that Marian Maidenform was drop dead gorgeous in a cold, calculated way. Her straight black hair poured to her tiny waist like an ebony waterfall. Full pouting lips, chiseled cheekbones, and a thin nose with just an ever-so-little turn-up on its petite end well complimented her pale complexion and piercing violet eyes. Her long, flowing robe in a sheer, shimmering lavender tone clung to every curve and valley of her voluptuous figure. I had to admit I possessed an aching desire to cup her firm breasts in my own hands and tweak their rosy nipples until they poked through the see-through cloth. It was more than obvious that she didn’t wear undergarments of any kind and sported a shaved pussy.

Worse yet, as long as the whore stood in the room I realized I’d never get any coherent conversation out of either Willie or my lover.

Robin simply stood there, helpless, obviously incapable of movement or intelligent thought. I sank further into the sheets and sighed in disgust.

“Marian,” he whispered again. “Where have you been all this time? Why did you leave me?” “Who’s your little playmate?” She ignored Robin’s plea. Pushing him aside, she stood at the edge of the bed, hands on hips, glaring at me with dead purple-gray eyes. If looks could kill, the last seven generations of my ancestors and I would be obliterated from the course of history—including the textbook footnotes.