Izzy Calhoun Simon, a successful writer for a highly acclaimed TV series embarks on a much needed vacation from her hectic lifestyle when the TV series ends its run. It’s Christmas time in Beacher and the town reminds Izzy of an old fashioned postcard. She soon realizes the contrasts between city living and small town living. When she meets Katelyn Anderson, she is instantly drawn to her, but Katelyn keeps giving her mixed signals. 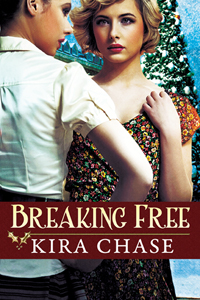 A bell on the door tinkled merrily as she opened the door. Her eyes swept around the crowded room until she spotted an empty booth in the back. She reached it at the same time an attractive blonde did.

“I’m sorry,” Izzy apologized. “I didn’t see you.” She backed away from the booth, scanning the area for another available seat. All seats were full so she resigned herself to the fact that she’d have to come back another day. The coffee would have to wait.

Izzy returned the smile with one of her own. “Thank you, but I think we both got here at the same time. We could toss a coin,” she teased good-naturedly. She wondered if the attractive blonde was waiting for someone.

The woman laughed softly as she looked into Izzy’s eyes. “Or we could share it if you’re not expecting anyone. I just stopped in for a quick cup of coffee.”

“So did I,” Izzy replied. “I’m not expecting anyone and I’d enjoy the company,” she added quickly.

The blonde shrugged out of her pink parka as she slid into the bright red vinyl-covered booth. She rubbed her hands vigorously together. “It’s freezing out there. And wouldn’t you know it, I walked out the door without my gloves this morning.” She glanced toward the window. “I hope we don’t get too much more snow.”

Izzy removed her long dark red wool coat and placed it on the booth, then seated herself across from the woman. She watched as the blonde removed her hat, then shook her head, letting her golden hair fall loosely over her shoulders. She was about two inches taller than Izzy and had a fuller figure. Her green sweater brought out the green in her eyes, but her smile was what captivated Izzy. It was amazing. Her actions as she folded her hands and looked into Izzy’s eyes made Izzy relax some.

“By the way, my name’s Katelyn.” She stretched her hand across the table. “Katelyn Anderson.”

Katelyn smiled. “Well, it’s nice to finally meet you, Izzy.” She held up a hand before Izzy could respond. “Small town…news travels fast. Have you settled in?”

“For the most part.” She held her breath, wondering if she’d been wrong about Beacher. Maybe it wasn’t such a good idea after all to dream of settling down in a small town. Maybe she’d be trading the hustle and bustle of a large city for the stresses that came from small town gossips where nothing in her life would go unnoticed from watchful eyes.

No, she wanted the charm of a small town. She wanted to belong somewhere…a place where she recognized the faces she passed on the streets, not another city filled with strangers. She smiled uneasily at the pretty woman and braced herself for what she was sure would be an onslaught of personal questions, but Katelyn surprised her.

“Good. I hope you’ll like it here. If you need any help just let me know.”

“Thank you.” Off hand, Izzy couldn’t think of anything, but was grateful for the offer.

An energetic young waitress appeared at their table. She smiled at Izzy. “What can I get you?”

She thrust her hands straight out in front of Katelyn. “Oh, before I forget, can you squeeze me in for a manicure sometime next week? Evan’s got some special plans for Christmas Eve and I want to look my best.” Her eyes glowed with excitement. “My nails are a mess!”

Katelyn squeezed Gracie’s arm. “Sure, just call the shop. I’m sure I can fit you in.”

“Great. I’ll be right back with your coffee.”

“Gracie’s hoping her boyfriend, Evan is going to finally pop the question on Christmas Eve,” Katelyn explained. “They’ve been inseparable since they first met as toddlers in the sandbox.”

“I hope you don’t think I’m gossiping,” Katelyn said quickly. “I’ve known Gracie and Evan’s families all my life. Everybody’s been patiently waiting for the day those two finally marry.”

Izzy shook her head. “No, I didn’t think you were gossiping.” She saw the genuine love for the young couple reflected in Katelyn’s eyes. She glanced down at her fingernails. It had been a while since her last manicure and she was long overdue. “So, you do manicures. I think I should make an appointment with you, too.”

Katelyn nodded. “Any time. My shop is right around the corner on Second Street. You can’t miss it.” She grinned. “It’s the only one in town.”

Gracie brought their coffee, and then hurried to a table in the middle of the room filled with teenagers.

“Good. I’ll call on Monday.” She stirred some sugar and cream into her coffee.

Katelyn sipped at her black coffee and then set her cup down. “So, what do you think of Beacher so far, Izzy?”