Bullies and the Three Monkeys: How the Vicious Cycle Can Be Broken

From the authors of Kar-Ben’s award-winning Six Million Paper Clips: The Making of a Children’s Holocaust Memorial, comes a book about teaching the lessons of tolerance gleaned from the Holocaust.
In Bullies and the Three Monkeys, Peter W. Schroeder and Dagmar Schroeder-Hildebrand, searching for lessons to be learned from the Holocaust, discover the “Pyramid of Hate,” in which seemingly small acts of intolerance, such as bullying, can mushroom into unspeakable tragedy.
More than half of all children in North America have to endure emotional and physical violence. A lot of these victims, some as young as nine years, see only one way out, they commit suicide.
The Schroeders have spent years talking to students, parents, educators, experts and government agencies mainly in the US and Canada, seeking answers to the following questions:

- Why do bullies bully?
- What does bullying do to victims, their families and society in general?
- Is there any way to break the vicious cycle and instead practice tolerance and appreciate diversity?

In this book, both the bullies and the bullied offer promising solutions.

About the Authors:
Peter W. Schroeder is a journalist and economist. After being stationed as a diplomatic correspondent in different parts of the world, he works as a columnist for a group of European newspapers. He has published books about history, the Holocaust, human rights, and American-European relations.
Dagmar Schroeder-Hildebrand is a psychologist and also a journalist. She was founder and chief editor of a magazine for the parents of physically and mentally challenged children. Like her husband she works as a newspaper correspondent. She has published books about social issues, minority and children’s rights, and biographies.
The husband-and-wife team divides their time between Washington, D.C, Victoria/Canada and Germany. They have two children and five grandchildren. 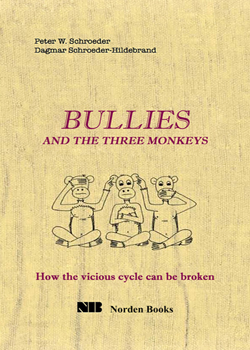 Bullies and the Three Monkeys: How the Vicious Cycle Can Be Broken