Jody had the misfortune of breaking her ankle. The only available apartment to convalesce in is a derelict mansion just outside of town. The tenants prefer to keep to themselves except when sneaking strange dolls into her rooms. Suffering from loss of memory after a horrific event destroyed her biological family, Jody clutches at straws trying to find out who she is and why some people in the house leave her clues to get out or get murdered. Find out if Jody regains her memory, what happened to her family and who, among her friends, is actually her enemy, working to see her killed. 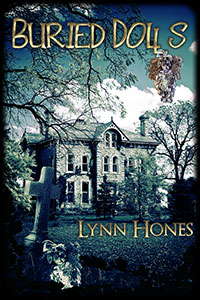 “This is the part where you shoot me in the heart with a Carbine, right?” Jody asked.

“Yes,” Mr. Rutherford answered, his eyes swilling with antagonism. “And then I’ll mummify your body in a barrel of brine.”

“I can handle that,” Jody said. “Just don’t stick a party hat on my moldy skull and plop me in front of a decaying birthday cake with the rest of your unwitting victims.”

Jody liked Mr. Rutherford. He got her. Not many people did. That part of their meeting appealed to her. Standing on the ornately decorated back porch of his large home didn’t. It enveloped her chilled body with an epic sense of the creeps.

“Ya gotta admit,” she said, “this house could make the top ten pick of America’s Most Haunted.” With that she shivered. “How much is the rent again?”

“Well,” he rubbed his scruffy gray beard with a beefy hand, “normally I charge seven hundred a month, plus first month and security, but since you’re such a sorry little thing, what with that hunchback and that strange third eye growin’ in the middle of your forehead... how does six hundred grab ya, with no security for now?”

“That grabs me just fine.”

It was dark out, and the isolated home had a single bulb on the porch that shed enough light for her to write him a check with a shaking hand. She tucked her long, blonde hair behind her ears and wondered if her shaking was due to cold or an unusual sense of foreboding. She rubbed her turned up nose and sneezed as she handed him the check with a wink and thanked him with a smile.

“It’s a good thing your friend called when he did,” Mr. Rutherford said. “I was on my way to The Bucks Inn for a brew. If he’d called once I had my suds in front of me, I never would have driven back here to see ya.”

“I really appreciate this. Really—you have no idea.”

Jody’s old apartment, where she had lived since being given her freedom, was being torn down. She realized how awful the place was once she heard of the impending demolition. Before that, it was simply home.

“I have two days to get a place and most people want those pesky references and credit checks. It’s none of their business I don’t flush every time I should.”

“I don’t flush, and between you and me, I’ve never mummified a body,” he said. “I was joshin’ round ‘bout that.”

“The minute I laid eyes on you,” Jody said, “I knew you weren’t a flusher or a flosser for that matter. And sorry for the getup.” She glanced down at herself.

“Hey, you look normal to me. Cuties with freckles like you can get away with anything. People ‘round here wouldn’t blink an eye, or three.” He pointed to the fake plastic eye glued to the middle of her forehead. “Move in anytime. Just don’t make too much noise. Mrs. Crimson isn’t fond of it.”

“Yeah, okay. You said she’s the old dame below me, right?”

Jody walked down the crooked wooden steps of the house, along the driveway and through a tall, ornate metal gate stretched across it. Her friends were waiting in the car as she hopped into the passenger seat.

“Well?” Porter asked in a faded, water-colored Parisian accent. Tall and thin with wispy, black hair, he looked the part of a French starving artist/art teacher. “What happened?”

“Great.” He put the car in reverse.

In the back seat, dressed as a vampire, her friend, Sienna, blanched. “So you’re really going to rent this place? It’s so big.”

Jody turned to look into the back seat at her friend. “I don’t get the whole house, just a second floor apartment. It’s cut up into five units. And it’s only creepy cuz it’s night.” She then noticed the truck.

Mr. Rutherford’s wretched pickup truck, with no hubcaps and painted a bright green, blocked the end of the driveway.

“Damn, I forgot he’s got to let us out,” Jody said. “But, he’s coming. He’s on his way to some bar called The Buckstop, or something, for some beer.” She craned her neck to look for him. “Where is he?”

“I don’t know,” Porter said. He tapped the steering wheel irritatingly with his fingers. “But I’d like some brews myself. The party started an hour ago, and knowing these young frat boys, half the keg’s already gone.” He turned to look behind him.

“You’re too old for these parties, anyway,” Sienna said and then laughed.

“Maybe so, but some of us never want to grow up... or grow old,” he said. They both laughed, but Jody didn’t find it humorous enough to bring forth even the slightest amusement.

Sienna rolled her window down and looked out. “Can you go around him?”

“I don’t know,” Porter said. “Argh. Why is it always something?” He got out and, hands on his hips, pivoted left then right. “No, they got this driveway cornered off like Fort Knox. I’ll go look for him.”

Jody reluctantly got out, too. Together, she and Porter walked up to the house that was in need of a good scraping and painting.

They spotted Mr. Rutherford in the back yard. Kneeling. What was he doing kneeling? “What the...” Porter whispered.