Burn the Binary! - Selected Writings on the Politics of Trans, Genderqueer and Nonbinary

An icon of transgender activism for three decades, Riki Wilchins is the author of four influential books on genderqueer, trans politics, and queer theory. Riki Wilchins has been a pioneering and influential thinker and writer for a quarter of a century. Now this single volume offers a selection of Riki’s most penetrating and insightful pieces, as well as the best of two decades of Riki’s online columns for The Advocate never before collected. Think of this as Riki Wilchin’s greatest hits! 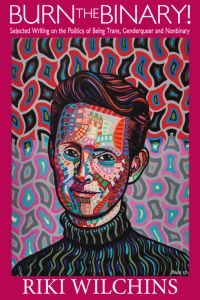 Burn the Binary! - Selected Writings on the Politics of Trans, Genderqueer and Nonbinary

FROM: I Was Recently Informed I Was No Longer Transsexual

I was giving my Gender 101 talk when I learned I am no longer a transsexual. I was defining the difference between ‘transgender’ and ‘transsexual’ but was stopped by three young persons—two of whom identified themselves as nonbinary—who took strong exception.

‘We don’t use that anymore,’ they said. The term was objectionable because it ‘medicalizes’ transpeople and ties recognition of genital status—which is private—to gender identity.

So it was not only archaic, but offensive. I’d long known I was offensive—often intentionally so, more often unconsciously. But it was the first time I learned I was also archaic.

You could hear everyone stirring and their attention swiveling towards me, smiles gone, tense faces, that awful smell of gunpowder in the air as another explosion in the political correctness battle was about to detonate.

But who has the right to certain terms is not just about PC. It is deeply intertwined with our bodies and identities. It’s not just WHAT is said, but WHO does the saying.

It dawned on me that these individuals probably read me as another privileged straight white cisgender male. I always assume my transgender-ness is apparent, though in this room I was obviously wrong. I needed to come out.

So I explained that… ahem… I started my own transition to female in 1976 and that transsexual was indeed the term-of-art we used. Others used it, my wife-to-be used it. The book many of us read was titled The Transsexual Phenomenon. I co-founded a nationwide protest group called The Transexual Menace.

And, oh yes, I had my surgery before any of you were born.

Everything in the room seemed to freeze. The straight, white, oppressive cisgender male had morphed into… an oppressed marginalized transgender queer. So who is politically incorrect now, hmmm? The sex change was on the other foot…

FROM: Transgender Dinosaurs & the Rise of the Genderqueers

She was a lovely 13-year-old with long blond hair, hazel eyes, and round hips. Her bold smile betrayed none of the self-consciousness that I had when I began dressing in feminine clothing as an adult. Assuming she must be friend of the transgirl I was there to meet, I smiled back but then ignored her.

Never having passed as female I’d finally given up trying. Besides, it seemed somehow counter-revolutionary. The new transgender politics was increasingly built around exactly the kind prominent social visibility and defiant non-passing that my 1980s doctors assured me would signal my failure as a “sex-change. “

For 30 years my identity was built around memorial vigils for slain transwomen, picketing transphobic groups, public fights with TERFS, being evicted from women-only groups—all the experiences that made me who I was as a visible transsexual.

But, what if all that were wiped away? Who would I be? What would I have become?

Androgen blockers in puberty can now prevent all the painful, irrevocable testosterone effects which I dedicated a decade of my life trying to reverse—chest hair, beard, Adam’s apple, etc. And now they had made this lovely young person into an entirely non-visible transsexual.

She didn’t cross the same gender lines I did, or even rub up against them.

This is not to say that she will never experience any of the pain or dislocation I felt, But she has options for a kind of social acceptance of which I could never dream.

As androgen blockers are increasingly taken by adolescents, would we one day abruptly lose the visible transsexual? Twenty years from now, will that entire experience I understand AS transgender be gone? Will our memories, our accomplishments, our political movement, will all that seem irrelevant and antique, like the hey-day of radio. In 50 years, will it be as if we never existed?

“Feeling transgender” might become not just more acceptable, but one day logically impossible. Without knowing it, was I becoming a gender dinosaur?