David O’Malley is a former Minor League baseball pitcher turned Anglican Priest who is fed up with the pettiness and hypocrisy of organized religion. He’s conflicted about his priestly vocation.

Hannah and David fall in love when they join forces to save two neglected lions from a roadside zoo. But when Hannah’s profession becomes known, the Church orders David to end his relationship with her.

Will David choose passion or the priesthood? Can love be a gateway to freedom for two people who are both imprisoned by their own loneliness? 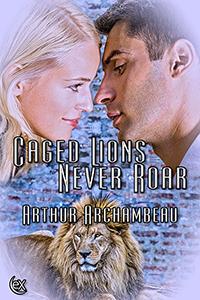 Their names were Bobby and Babs and they spent their days pacing back and forth in a habitat no bigger than a two-car garage. Two four-year-old African lions who had spent their entire lives in captivity. They were the star attractions of Colonel Rupert’s Wildlife Wonderland Zoo, a small, roadside zoo in Baltimore. There was a wading pool in their enclosure filled with filthy water. Bobby and Babs never used it. Lions, unlike tigers, don’t like water. Colonel Rupert, evidently, wasn’t aware of that.

Hannah Cohen stood in front of the enclosure, sipping her coffee and shaking her head. “Oh, Bobby! It looks like you’re getting mange. And Babs, you’re limping today. Do they ever have a vet come in here to look at you two?” she wondered aloud. She shivered in the chill of early April in Maryland and wished she had worn her mittens and a stocking cap.

Hannah was twenty-six years old, shoulder-length blonde hair, sky blue eyes, with an athletic build. A dead ringer for a young Debbie Gibson, she wore a red University of Maryland hoodie, faded blue jeans, white sneakers, and a pink Orioles cap. Her ponytail stuck out from the open back end of the cap. Dangling from her wrist was a rope. Attached to the rope was a white bar of soap.

As she watched the lions pace, a tear raced down her cheek. She made a weekly visit to the zoo to check on Bobby and Babs and every week she cried when she saw them. This day she cried especially hard because she could see that the lions were deteriorating, both physically and mentally. She sniffled and searched her purse for a tissue.

“Here you go. I’ve got you covered.” A large hand offering a travel size pack of tissue appeared in her peripheral vision. Hannah turned her head and saw him. He was very tall, about six-feet-four-inches, she guessed, late twenties, athletic build, auburn hair, royal blue eyes, deep tan. She took a deep breath and caught a whiff of his cologne. It smelled like chocolate, almost like a bakery. He was wearing a white dress shirt underneath a powder blue, cashmere V-neck sweater, black gabardine trousers, and a pair of shiny black penny loafers. On his left ring finger, he wore a huge gold ring with a black onyx stone. The ring is gauche, she thought. A little too Wise Guy-ish, but it wasn’t a wedding ring. She thought he looked like a 1960s hipster crooner—the kind who had an effortless, velvety voice. The kind who could sing you to sleep with some tender, romantic lullaby. Yes, he looked like a singer from a bygone era, dressed for his album cover photo shoot. All he needed was a lit cigarette between his fingers.

“Here, you can have the whole pack. I got an entire case of them at the wholesale club the other day,” he told her.

Really? Who buys an entire case of tiny packs of tissues?

She took the pack of tissues, opened it, and dabbed her eyes as she sniffled. “Thank you. I don’t mean to make a spectacle of myself, but I come here every week and I get so emotional when I see these beautiful animals living like this.”

“This is my first time here, but I’m appalled by what I see,” he said.

“So you have a problem with this, too?” she asked. She was excited at the prospect of finding someone who was as offended by the conditions as she was.

“Yes. I love animals and I hate to see them suffer. And these poor lions are suffering. I saw some pictures of this place online and had to come and see if it was really as bad as it looked.” He glanced at the pacing lions, then added, “And it is.”

“I come here every week to check on Bobby and Babs. Part of me hates doing it because every time I come and pay the admission fee, I’m putting money in old man Rupert’s pocket, but I have to see my Bobby and Babs. I just have to,” she said.

He shook his index finger for emphasis, “You know, one thing I’ve already noticed is that I haven’t heard either of them roar.”

“Oh, and you won’t. They don’t roar. Neither of them. I’ve been visiting them every week for over a year now and have never once heard a roar. Another thing, they’re male and female yet they’ve never mated, never produced a single cub.”

She shook his large, warm hand. “I’m Hannah Cohen. Nice to meet you.” He’s cute, very cute. Even if he does look like he could have been the sixth member of The Rat Pack.

“That’s, uh, an interesting bracelet you have there.” He pointed to the soap-on-a-rope hanging around her wrist.

“Ah, yeah. Good luck charm. Yep. My good luck charm.” She nodded emphatically. There is no way I’m getting into that whole issue now.

“Well, it’s more original than a four-leaf clover, that’s for sure.” He moved on. “You know, someone should do something about this place. The conditions are horrible, but it doesn’t look like anyone’s doing anything to force a change.”

“It’s legal, perfectly legal. Colonel Rupert’s meeting the minimum standards according to the law. Animals don’t have many rights, so the standards are low. In the eyes of the regulators, housing lions like this is acceptable.”

“That may be true, but there are still things that could be done. You know, get the press to come out here and document the conditions. Write letters to the editor. Start a petition. If they get enough bad publicity and public pressure, they might clean up their act. Or even agree to let the lions go to a real wildlife refuge, where they’d have plenty of room.”