A blind Marine, a nervous bride, and an adorable child with Down syndrome who loves them both is an equation for another tug on the heartstrings in the story behind the Heartsight nuptials. Is Trish ready for life as a military wife? Is Dan ready for the challenges of being a father to a precocious 6-year-old? How will Bella add her special brand of magic to the day? 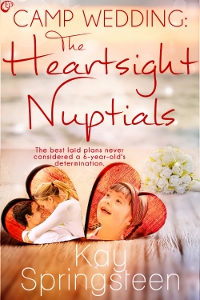