Candle in the Window

When Jim Trask lands a job on a commercial fishing boat, his wife, Becca, fears the worst. She has lived by the ocean all her life and never managed to overcome her fear of it. Coping with Jim’s absence is a chore, then her worry becomes reality when all communication with the boat is lost. Panicked, Becca searches for a beacon of hope, a way to cope with the awful fear that her beloved Jim may be lost at sea. Can Becca find solace while she waits to learn of Jim’s fate? Can anything ease her fears? Or can Becca finally put Jim’s fate in God’s hands and resign herself to His will? 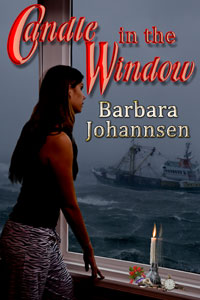 Candle in the Window

Becca Trask cleared the dishes from the table and wiped up the spills, then carried the tray to the restaurant kitchen. The muscles in her arms ached. Lifting heavy trays of food, then empty dishes, was putting a strain on her body. She sighed and carried the dishes to the sink. Betty Thorn, the kitchen helper, smiled at her.

“Are you getting used to the harried atmosphere of the diner?”

Becca grimaced, then forced a smile. Since having taken the job, she had been the only one of the crew to complain about sore muscles. “I should be more active. Then I wouldn’t have sore muscles.” She rubbed her left arm. “I don’t suppose the owner would hire a busboy to clear tables.”

Betty shook her head. “Sam is barely making ends meet as it is, honey.” She nodded her head toward the dining room. “Business has slowed down to what it used to be before the steel mill closed.”

“I know. I’m grateful for the job, Betty.” She smiled but she didn’t feel the glee accompanying the action. Jim had lost his job when the mill closed nine months ago and just two months ago, they were forced to give up their house. Moving back home with her dad was the last thing she ever dreamed of but circumstances just became too dire otherwise.

“I suppose Harold likes having you back home, even though he knows it’s only temporary.”

Becca shrugged one shoulder. “Dad misses Mom and I guess having someone else in the house takes a bit of the loneliness away.”

A year ago, Sondra Newman suffered a fatal heart attack. It had been totally unexpected. She was only fifty years old and thought to be in excellent health. Becca fought the rush of tears to her eyes. Sometimes she just didn’t understand God’s ways. First, He took her mother, and a few months later, Jim’s job. Neither event made any sense. Grief still gripped her heart and just looking at her poor dad, made tears come to her eyes. He and her mom had been high school sweethearts and their marriage was ideal. Her dad still surprised her mom with fresh flowers occasionally and invited her out for impromptu dates.

“Time heals all,” Betty said, placing the soiled dishes in the dishwasher. “Or so they say. I, personally, find time only prolongs the hurt.”

Betty had lost her husband ten years ago and came to work at the café to make ends meet. She cooked and managed the kitchen when Sam needed time off. She was a tall woman with gray hair that she wore in a tight knot on the back of her head. Becca had known her since childhood, when she used to trick or treat on Halloween. Her house was just down the shore line from her father’s. When Jim lost his job, and she finally won the argument about returning to work, she was glad to have Betty as a coworker. Seeing a familiar face at the workplace took the edge off having to learn to be a waitress.

Becca returned to the front of the restaurant. As she pushed through the swinging door separating the rooms, she saw a couple just seating themselves. She took her pad and pen from her apron pocket and stretched a smile across her face.

The afternoon crowd at the restaurant was smaller than the morning customers. Working people crowded into the diner for Sam’s hot coffee before work. Some were regulars to have breakfast and others ordered Betty’s homemade cinnamon rolls to take with them. It was hectic for about two hours, beginning at five o’clock in the morning. She stifled a yawn and wrote the couple’s order on her pad. As she turned toward the kitchen, she glimpsed Jim coming through the front door. She paused, made eye contact with him, then resumed her trek to the kitchen.

Once Becca placed the order, she glanced at the front counter and saw Jim sitting on the end stool. She surveyed the tables with customers, making certain she could take a minute, before rounding the end of the counter and joining him. He smiled as she came toward him. Oh dear God. She hadn’t seen him smile so broadly since he lost his job. Her stomach quivered with uncertainty as she made her way over to him.

“Why are you grinning?” She stared at his face, the handsome countenance she had adored since her teenage years. He had boyish good looks, a spray of freckles across his nose and blue eyes that seemed to light up when he was happy. She reached one hand to his forehead and brushed a stray blond curl back. “You could really use a haircut, hon.”

“That’s not important now, Becca. I just found a job.”

Relief surged through Becca’s insides like a mountainous tidal wave. “Oh, honey, really?” She stepped closer to the counter, even though the urge to announce the good news to all in the restaurant inched up her throat. “What kind of a job?”

“Mack Harvey just hired me. I’m an official crewmember on the Ambassador.”

Becca drew in a quick breath. “The fishing boat? Jim, you don’t know anything about—”

“I know. That’s why I’ll be the rookie on the next trip out.” He stared at Becca, the grin on his face waning.

“That’s such dangerous work.” A shard of fright sliced across her stomach. “Why did you even think of asking Mack for a job?”

Jim reached across the counter and took Becca’s hand. “Because I’ve been to every plant and business in this town and no one is hiring. There are no jobs in this area, Becca. It’s either take what I can find or move to another town.” He drew in a long breath. “I’m not crazy about being gone for a six week stretch either, or fighting the cold and wet onboard the fishing boat, but at least we’ll have an income.” He looked away, the smile leaving his face. “Tom will be going out with the crew. He put in a good word for me, honey. I’ll learn from him.”

“Tom! Tom Fischer is about as reliable as a broken leg on a hillside.”

Jim laughed and shook his head. “He’s my cousin and I can rely on him. Everything will be fine. And besides, every crewmember gets a cut of the total value of the catch. I could come home with ten thousand dollars.”