In "Candy from Strangers," Dylan, a twenty-something English lad who’s successful, charming and beautiful, thinks he has everything, until one day his world is turned upside down when hot new neighbour, Darien, moves in across the road. The two begin a steamy affair that leaves Dylan breathless and thinking he may have finally found Mr. Right. But as time passes, cracks start to show in Darien’s story forcing Dylan to question everything he thought he knew about this dark stranger.

Candy from Strangers is a lustful tale of romance, intrigue and mystery that poses the question of how well do we ever know the ones we let into our lives… 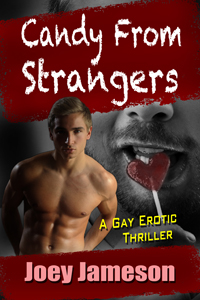 I pulled back abruptly and keeping his eyes locked in my gaze, I began to seductively unbutton my shirt. Pausing at the last button, Darien took my lead and peeled it off of my chest for me. He took in the sight of my naked torso for a minute, his lips parted, and taking a deep breath he took a corner of his own t-shirt in each hand and sexily lifted it off over his head. Every muscle in his perfectly defined chest contracted and stretched until he let the top fall to the floor. His smooth hair-less chest almost glowed in the soft light of the candles. His shoulders were even broader than I expected, and his sculpted biceps the result of an apparent gym obsession. His round dark nipples were hard and standing at attention, just begging to be sucked, and his six-pack abs preceeded a treasure-trail of short dark hairs that disappeared down his lean tight stomach into the front of his low-slung jeans.

My hands found his torso and began exploring his skin, the sensation of rubbing his soft smooth skin made my cock wet, the head pressing harder and harder up against my shorts, longing to be released. I kissed him deeply for a moment before pulling back and beginning my descent on his chest. My mouth delivered short kisses on his neck, pausing briefly to take in the scent of his aftershave. His skin tasted sweet and fresh like mint mixed with fresh laundry. Darien let his hands fall to his sides and his head dropped back, a low moan of pleasure escaping from his lips. My tongue began lapping his pecks, encircling his nipples and sucking gently while my hands held on to his arms, squeezing a little bit despite myself. Then taking a hold of his sides I got down on my knees, letting my tongue trail his abs getting lost in their perfectly defined grooves.

I opened my eyes and looked up at him as my hands began undoing his belt. He instinctually looked down at me; his lips parted slightly anticipating what was to come. I let his jeans fall to the floor and broke our gaze only for a moment to take in the sight of him in his black Calvin Klein boxerbriefs. His rock-hard cock was practically trembling. I kissed it through the contours of his underwear and it twinged in reaction. I could feel Darien’s breath getting shorter as his pulse began to race, excitement taking over both our bodies. With both hands I slowly pulled down his pants, exposing his cock, the mushroom head already wet with pre-cum. His pubic hair was trimmed short and surrounded the main attraction beautifully. I took his throbbing dick in my hand and gave it a slow stroke. He was huge; long, pink, wide and perfectly straight. Meeting his eyes I led him into my mouth, shallowly at first getting a taste for his cum, then opening my mouth further I allowed him deeper into me. The muscles in my throat relaxing as my head began to bob slowly back and forth. My hands reached around to his ass and taking a cheek in each began to massage him deeper and deeper into myself. I could barely breathe I was so excited. I truly wanted him, and could tell he wanted me back. Darien tilted his head back suddenly as his body shuddered. I began to deep throat his cock, feeling the head gently pushing against the back of my throat, my tongue working like mad up and down his long shaft, licking up every drop of his salty cum in my mouth. I could feel his body stiffen as he got more and more turned on. My head was spinning; I couldn’t believe this was happening. I am not this guy…I usually have enough resistance to at least make guys ‘work’ a little harder to get me on my knees, but there was certainly something about Darien that made me lose all self-control.