Captured by a Laird (MF)

After the death of her father, and disguised as the legendary Green Bow, Lena strives to protect her home from the greedy lairds who covert her fertile land. While riding one day, she is abducted from her mount by Stref—Laird of Harris—who believes he had bagged himself the notorious Green Bow.

As Stref arrives to hang his prisoner from the tower, a prickle of doubt creeps into his mind.

What follows is a feisty tale of adventure and betrayal before the couple can declare their love and embark on their happy, if rather lusty, ever after. 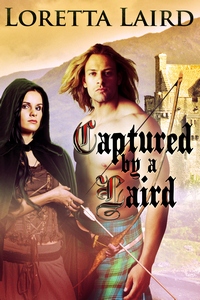 Captured by a Laird (MF)

Furious at her own weakness, Lena brought her own hands up and roughly rubbed her face to rid it of the telltale sign of her vulnerability. Her cheek glowed where his touch had been, and Lena rubbed harder to erase the sensation.

“What if this Green Bow does not come?” she asked.

“Oh, he’ll come,” Stref spoke, leaning down again so his face was level with hers. “I would risk any kind of death to reclaim a beauty such as you. I would kill a whole croft if I thought any had touched what was mine.”

Lena let a tiny moan escape her as Stref’s gaze met hers just inches apart. The tip of her tongue poked out to moisten the lips that suddenly felt dry and cracked. Stref growled. His eyes darkened and he leaned forward to claim her lips in a crushing embrace.

Lena tried to pull back, but the kiss was relentless. Stref’s strength was bruising her previously unkissed lips. His tongue probed into her mouth, seeking out each corner with its dominance. A large hand reached up to hold her head fast whilst another traced a line down to cup her left breast. Lena tried to fight, but then stilled as the strange sensation, which had recently come upon her, returned. She closed her eyes as a blazing trail coursed through her body, pulsing delightfully in her inner core. Unable to fight the feeling, she responded to the passion that assaulted her. Her tongue parried and her hand entwined in the thick hair that curled at the nape of Stref’s neck. Never had she experienced such an internal commotion. Her head was screaming at her to fight and run whilst her body held her fast, savouring the sweet feeling that she wished would never end.

All too soon a cold rush filled Lena’s body. She opened her eyes to meet the cold grey eyes of Stref Harris.

“Once a whore always a whore,” he said. “You are good though. I nearly fell for the innocent tears. What was the plan this time, to get me into bed then sneak back to him? Sorry, lady, but I am on to you. I don’t need you in my bed. I have more than enough women here for that. You are here to bring my enemy to his death; nothing more.”