Do you believe in vampires?  I sure didn't. Not until on my 16th birthday when I discovered I'm anything but human. And to add the cherry on the freaky sundae called my life, I'm the first Vntor born in over 500 years. You see, it means I'm destined to be a hunter of evil. That's right; I'm a real life Buffy.

And to make matters worse, I'm falling for Ryanthis new guy at school. I never thought I'd be this love struck, hair tossing, dorky teenager. It's enough to make me want to hurl.

Oh, I almost forgot to mention that on top of all this, I have an entity stalking me that wants to use my rare blood for his own evil deeds, a girl at school who lives to make my life miserable, and a gymnastics coach who is determined to see I make it to Nationals.

Yep, things are really looking up for me. Welcome to the never boring, anything by normal, you never know what's going to happen life of Cheyenne Wilde. 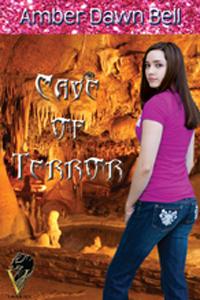 This new young adult series really makes its mark by putting a whole new twist on the stereotypical vampire myth. Cheyenne is a normal girl who is suddenly thrown into a new world while trying to deal with the usual everyday teenage problems. Younger readers can relate to her problems while older readers can sympathize with her for having to grow up so quickly. Her sarcastic and fun manner really makes her character realistic while her continuing strength throughout the whole book keeps her human and likeable.
Cave of Terror has a good, interesting and fun plot with characters that grow on you makes this debut a brilliant start to what I hope will be an addictive new series. The author has managed to write a new, fresh and Heather Brewer like story which has me looking forward to the second part, A Ghostly Affair, which is due out in 2009.
Amberkatze's Book Blog
~~~
Highly entertaining and fun, Cave of Terror was impossible to put down. Though at times dark and evil, Ms. Bell never failed to inject some light-hearted humor into the story. Delightfully funny with a true sense of teenagers, Cheyenne's character will appeal to many girls of that age. She is believable and her emotional struggles are on par with most teens. I found this to be an easy read; the author gave just enough background to understand the workings of her vampires without boring the reader. I truly enjoyed the male characters, Ryan and Constantine. Ryan was adorable and a teenager's dream. Constantine was deliciously dark. I look forward to reading more by this talented author. Ms. Bell has done an admirable job of telling a story suitable for young adults.
Dawnie, Fallen Angel Reviews
~~~
Wow, Amber Dawn Bell has written a really good young adult story that is full of adventure and dark, deadly secrets. I was totally captivated by this story and enjoyed every word. This author has captured the life of a young teenage girl perfectly and poor Cheyenne doesn't only have the usual teenage problems, but a whole barrel of paranormal adventures to cope with. Ms Bell's prose is very good and she certainly got my hair standing on end a few times. The story takes twists and turns and not everyone in the story is who they make out to be. I think young adults will love this story and adults, too. I'm certainly looking forward to the next installment and further adventures of Cheyenne Wilde.
Valerie, Love Romances and More
~~~
Our heroine has a very distinct narrative voice. It is not hard to imagine her as a nice, likable teen, who suddenly finds herself as part of a world she never had a clue existed. She is bright, funny, loyal to her friends, and a tad sarcastic. Cheyenne's narration provides humor and drama in this delightful young adult story. I'm looking forward to more adventures with her. The next book in the series is A Ghostly Affair: Vanator Diary Series will be published in late 2009.
Patricia's Vampire Notes
~~~
Cave of Terror by Amber Dawn Bell is the perfect Young Adult read for those girls that enjoy a little bit of chick-lit with a hint of paranormal romance. Ms. Bell weaves her words perfectly entwining real teen emotions, thoughts, and feelings; all-the-while keeping it clean and enjoyable. I would absolutely read another book penned by the talented Amber Dawn Bell.
Crystal, Book Reviews by Crystal
~~~
This humorous and delightful tale of Cheyenne Wilde had me in stitches. I loved the way the writer depicts Cheyenne's character as "never crying over spilled milk." I thought the dialogue was well crafted and comically surprising.
Wanda, Ghost Writer Literary Reviews
~~~
I loved this book. Cheyenne seemed so like a normal teenager and her responses were some I've heard. Cheyenne wasn't a model teen. She made mistakes. She is trying to figure out this dating thing. She doesn't always think before she acts. She's also trying to do what is expected of her. She has goals that she is striving for, In other words, she a typical teen.
The story was fantastic. It was laid out that you weren't sure what was going to happen next. As the characters emerged more and more they developed their own personalities and quirks. Situations were presented in a natural way and nothing seemed to be forced. The world presented was thought out and presented logically by Cheyenne as she learned about it herself.
While there was a love interest, in fact, there were two, they were written very age appropriate for a teen. Cheyenne was just beginning to date and wasn't sure of all the rules. She was hesitant and unsure of herself. If she was attracted to one guy, how can she have feelings for another? What do you do when the guy you think you're dating is with another girl? No sex scenes just a girl learning about dating.
By the end of the book, I wanted to know where Cheyenne was going. I wanted to know what next. She was still learning about her power and gifts. She was still working on her relationship with a guy. She was still trying to figure out what it meant to be a vampire.
This book is written for young adults and I think it hits its target audience well. However, I would go so far as to recommend this book to anyone who enjoys a good paranormal story. It has enough twists and turns to keep adults interested while realistic enough so that teens can relate to the characters and situations.
Terri, Night Owl Romance

I whipped my head around to glance at Ryan just as he decided to do the sameour faces just an inch apart, our lips an inch apart. I drew in a quick breath. Before I had a chance to exhale, he pressed his lips to mine, sending unfamiliar sensations rippling through me. He opened his mouth a little and I followed, allowing the kiss to deepen. Tingles shot straight to my lower abdomen. He tasted like popcorn and Dr. Peppera salty and sweet combination that curled my toes. It wasn't as scary as I had imagined, yet so much more amazing than I had ever dreamed.