Allen only cares about his motorcycle, and his girlfriend Spencer cannot take it away from him. When nightmares of dying while riding his bike begin to haunt Allen, choosing between his girlfriend and his motorcycle becomes the difference between life and death. If only he didn’t have so much trouble deciphering these strange visions! As long as he doesn’t ride his motorcycle, he knows that nothing bad will happen. Or will it? And why is it so hard to stay off that bike? 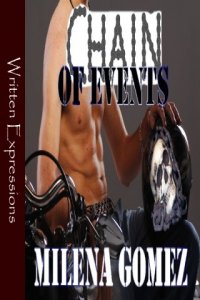 He could feel it in his skin. It was coming true this time:his death. As the shadows of the dark room hung over his terrified face, a silent, watchful presence was there to visit him. These were not just shadows--the Grim Reaper must want him badly. Or did he? Was the Grim Reaper himself there? Shivers ran down his spine. He could see these shadows creeping through the room, coming closer. They attacked his will to live . . . and this couldn’t get more personal. Naked as he was, he glanced over to Spencer; she was dead. The shadows formed into a bloody mass. He saw a terrified, scarred face lying lifeless before him, her corpse already rotting. How long had it been since she died? He screamed and took cover under his sheets—but he thought better of it, and he ran outside for his motorcycle, the only escape he had. No running allowed, just racing.

He mounted his Kawasaki and took off. Driving at full tilt, reaching speeds of at least a hundred and thirty mph,he didn’t even notice where he was going until a sign for Interstate 35W flashed before him. I-35W? Where was he? That highway wasn’t in Miami.

Trembling and drenched in sweat, Allen woke from the nightmare. This was the same dream he had experienced every night recently: his death. His heart was racing and ached with a sadness he couldn’t explain.