In the mist, haze, and shadows of the seashore, Elizabeth seeks out the man who has haunted her dreams forever. Yet, each time she catches Nathan, he seems to slip away, making her wonder if her timing is off, if she was perhaps rushing what destiny had promised. What she doesn’t realize is that her pursuit threatens to reveal a dire truth… one that will change her forever after. 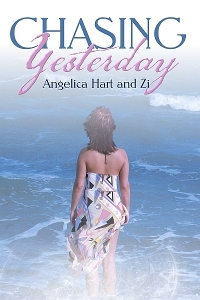 Her quick assessment over, she made her way to the beach, took off her sandals and walked the water’s edge. She giggled at the side walking jaunt of a hermit crab, stepped over the carcass of a horseshoe crab, noticed the wave of the breeze blown sparse tall beach grasses, and found entertainment folded amidst the squawk of constantly famished seagulls as they scoured for food and the opportunity to devour. Elizabeth slapped at the annoying chase of a green-headed fly. Now and then a wave caught up to her feet, swirling over it then retreating. The day had a gray cast to it, fog seeping over the jetties, as vendors set up, a ritual performed with tenacious repetitiveness for decades. The air was filled with the snap and flap of the cloth of many flags being placed outside of now opening businesses. A thud sounded nearby. Her body swiveled toward the sound, and discovered a vendor planting a beach umbrella in the sand, an advertisement for his chairs, rafts and colorful umbrellas. Running behind him, she saw a familiar crop of thick, slightly wavy hair, a profile that created spasms of delight as well as a shiver that contradicted the heat rises up from the sand.

She knew the cut of him, the width of shoulders, narrowness of his hips, the sculpture physique and the perfection of his profile. For a moment, she just stood there, blinked, a surge of disbelief, for in all her certainty somehow she didn’t expect this sudden sighting. She had waited for so long, and now…now…he was there.