Bruno knew what it took to make the perfect cherry strudel and he would teach Lucia everything that he knew. He took her through each stage, making sure that she got it right, even down to demonstrating the kneading motion on her. He promised Lucia that she could taste it when it was finished – but she couldn’t wait that long..

On Your Marks – Phoebe Grafton

It was another boring Saturday night and she is left with just one thought in her mind. Surely there has to be more to life than this. She soon finds that there is and it involves pirates, rugged captains and sex on the high seas. It will be a Saturday night to remember.

Kevin has always considered himself a leg man and when his boss catches him unashamedly admiring her gorgeous limbs she orders him to worship them. What else could he do? She was the boss after all. He was just following orders.

Henry was a collector of beautiful objects and Serena was the most beautiful thing he possessed. He was a man with a huge sexual appetite and she was always willing to fulfil his every need. She never refused him and was always eager for more. She couldn’t have been more perfect if he’d picked her out of a catalogue.

A Day of Pampering – Eva Hore

For once, he remembered her birthday and to make up for the ten that he had forgotten this was going to be one to remember. He’d planned everything, right down to the last detail and after a day of pampering she would get to enjoy what she had only previously dared to dream about.

These stories have also been published in Five Minute Fantasies One. 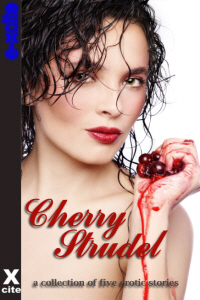 Lucia loved food – the look, the taste, the feel, the smell, even the sound of it as she kept it that second longer in her mouth before she let it slip away. Maybe the reason she loved sex was because, the first time she was seduced, her hands were deep into some pearly dough.
Lucia worked in a restaurant kitchen, learning, among other things, to knead the dough for strudel. Bruno, the Austrian cook, had convinced the restaurant owner that strudel – not just apple strudel, but cherry strudel, plum strudel and even rhubarb strudel – would be novel additions to the dessert menu of The Hungry Taste Bud.
Bruno was an artist, and, like most artists, he preferred to get on with the creative part, leaving the routine of preparing the strudel dough to the kitchen help. Yet he always kept an eye on the way the dough was prepared.
‘Two hundred and fifty grams of flour, Lucia. Mix it with 1/8 of a litre of water.’ Bruno paused as the girl in her white wrap-around apron dress gingerly measured the flour, tipped it into a bowl and added the liquid.
Lucia glanced up at the man. She needed him to give her time – time to see that it didn’t matter if some of the flour powdered onto the marble top counter.
‘Add two tablespoons of oil…that’s it…just pour it on…one whole egg, now…careful with the shell. Take the wooden spoon…stir it all about at first.’ His voice rolled low as Lucia stirred the dough, her silky black chin-length hair swaying to the motion of her arm, her eyes fixed on the changing matter in the bowl.
‘And now, Lucia, just a coffee spoon of vinegar and a pinch of salt.’
She added the last with a flourish and a satisfied smile.
‘Take the spoon out now, this is where you have to use your hands – if you want to make a really good strudel dough.’
Lucia scraped off the wooden spoon and watched as Bruno sprinkled more flour on the counter.
‘So that it won’t slip,’ he said.
She pushed a strand of hair from her forehead with the back of her hand causing tiny speckles of flour to trace her jawbone. As he lifted the mass of dough from the bowl and began kneading, a faintly sour scent rose up to her. She gazed at the long, strong and even movements of his hands as he kneaded the dough until it had a pearly sheen.
‘It has to look and feel like silk,’ he said. ‘Why don’t you go on for a while – just to get the feel of it.’
Lucia nodded, wiped her hands on her apron and plunged both hands into the dough.
‘Push down, Lucia. Push with both heels of your hands. Draw the dough back with your fingers. Keep the rhythm.’
Lucia pulled and pushed and pulled and pushed. It felt as though her whole body was moving in harmony. As she leant forward to push with the heels of her hands across the counter, her knees bent so slightly in a rolling motion, causing the hem of the back of her dress to rise with the swell of her shoulders bearing down on the dough.
Bruno took a step back to gaze at the hypnotic movement. The only sound that could be heard was the cool flap flap against the marble and the sound of rhythmic breathing.
Lucia kept on kneading, eyes half closed. She felt a hand brush a trace of flour from her cheek as another glided from her shoulder to rest on her hips. Lucia kept on kneading. She sensed the knot at the back of her dress surrender as the hands crept beneath the loosened cloth.
‘Hush,’ Bruno whispered in her ear. ‘Keep the same pace. It’s good for the dough.’