Joel’s new boss founded the ‘Clean Living’ movement to promote healthy living through celibacy, which Joel thinks is totally cool until a friend tells him what it means. Mr. Jeffers is also a stickler for hygiene – especially Joel’s—and his approach always includes a hands-on demonstration. Still, the job is easy and the pay is good, so who…or what…is a guy to do? 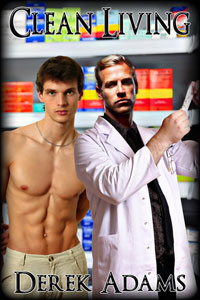 “Are you living a celibate lifestyle, Joel?” Mr. Jeffers sprung that on me one day in the stock room while I was eating a sandwich.

“Excellent, Joel. I’m sure that accounts for the rosy glow in your cheeks and your alert, clear-eyed demeanor.”

“Uh…sure.” I took a big bite of my sandwich. I kind of wondered whether jacking off multiple times a day was a plus or a minus for this celibacy thing. I didn’t want to ask.

We were closed for our daily lunch break and Mr. Jeffers was doing what he usually did—which was biceps curls. He’d come into the back while the pharmacy was locked down for lunch, strip out of his white tunic and do about a million curls, pumping these really heavy barbells he kept stashed there. Between sets, he nibbled vegetables and chunks of tofu—whatever the heck that was.

Mr. Jeffers had a real thing about bodybuilding, and he was in incredible shape. He didn’t have a hair on him, so there was no hiding the razor-sharp definition of his muscles. His gut rippled like a washboard, his pecs were enormous, and his biceps were totally awesome. I always made a real effort not to stare at him, but it was tough not to look.

Right after our conversation sort of fizzled out, he started pumping those weights again and his biceps looked like they were ready to explode. You could see all the individual muscles that made up the huge flexing knots and all the veins that bulged just beneath his pale skin. The only sign he was making any effort at all was the way his big nipples puffed up like pink candy kisses. I had only noticed it because he was back there in the small room with me for an hour every day, pumping away like clockwork. They always went from flat to fat in about two minutes. It must’ve had something to do with his blood pressure.

“What do you think, Joel?” He stowed the weights and stood in front of me, his left arm flexed.

“Looks great, Mr. Jeffers.” I watched a vein that snaked across the swollen curve of flesh twitch with his pulse.

Well, I guess I liked because almost before I knew it, I had both hands pressed against the hard, hot knot of muscle. It was so alive, throbbing with blood beneath my fingers.

“Squeeze it,” he urged, his voice almost a whisper.

I flexed my fingers against the unyielding mass.

“Like a rock, Mr. Jeffers.” I became suddenly aware that my heart was thudding against my ribs for no particular reason. His biceps were like a rock, but it was a rock covered with pale, warm silk. The skin on the inside of his arm was like touching a puppy’s belly. No telling how long we stood there, head to head, staring at his biceps. The spell was only broken when the clock chimed the hour, signaling the end of lunch break. My hands dropped to my sides and he slipped back into his snowy white tunic. He buttoned it and turned to leave the room.

He glanced over his shoulder at me.

“You’ve got something on the back of your pants.”

He swiped his hand across his ass, but the lint didn’t budge.

“I’ll get it,” I offered. He nodded. I touched the full curve of his butt. Damn, it was as hard as his arm! I brushed my palm back and forth across the tautly stretched fabric of his white pants until the offending fibers were gone. I was looking for more lint to brush when we heard a knock at the front door and Mr. Jeffers had to go.

After the door shut behind him, I looked down and saw that not only did I have a hard-on, but I’d also leaked a quarter-sized spot of cock snot onto my pants. I tried to readjust myself and ended up with a second spot below the first one. There was no way I could go out on the floor with a drooling stiffer stuffed down my pants leg. After I peeked out and saw that Mr. Jeffers was busy with a customer, I closed the door and unzipped my pants. 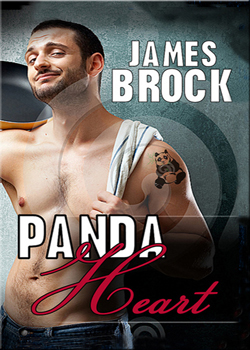