Gustov Stoneheart is an unlikely hero, a dwarf who’s magically torn from friends and family, thrown into a world where magic collides with steampunk. A prophecy predicts that he will bring down the human federation, and they hunt him with a passion. Hiding from them isn’t easy in the federation’s police-state, and Gustov must rethink his deep seated bigotry as orcs, elves, and his own changed kind aid him to make the prophecy come true. 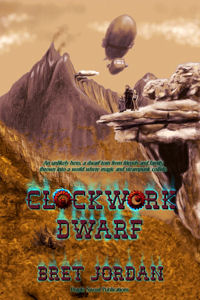 My name is Gustov Stoneheart, and I'm a dwarf. I have to be honest here at the start; I can't make sense of writing. I can't read it. I can't write it. I ain't writing it now. The elf gave me a confounded machine. I talk into it and it turns my words into writing.

She says there ain't any magic involved, it's only a machine, but I don't see how that's possible. How could a machine know what I'm saying? If it was catching my words and keeping them to be played back later, I think that would be a machine. Sort of like one of those fancy music boxes that stores…well, music. It could poke dots on a cylinder or something to save my words. I've seen machines do that, so I know they can store sounds. The elf says that this machine will take my rough, dwarven accent and make it proper, for the most part anyway. She says it will show where a thought ends and a new one begins. The elf talked about sentences and paragraphs and such, things I don't know about. "Just talk into the contraption and it will do everything that needs to be done," the elf said. The thing's too smart to be a machine. Smart enough to be magical.

It doesn’t run off steam because it ain't warm and it ain't hissing. The durned thing just keeps clicking as I speak. The faster I flap my gums, the faster it clicks. I don't see any words either. I think I would recognize them if I did.

Runes. I'm familiar with runes. I got one that I forged into my armor. It’s supposed to help protect me. Gave one to my wife on a necklace, in pure gold, that’s supposed to protect her. She also has a belt with a rune that is supposed to make her more fertile. I like young ones. I had one. I wanted more. I also stamped one onto the head of my axe. It’s supposed to help me cleave skulls. They all work, I suppose, though I got no proof other than that I’m still here and had a kid. They ain't magic. The symbols act like magic, but runes are different.

The runes are constant requests to the gods to give us aid, Donnan in particular. When I forged the symbol for protection into my breastplate, it was a sign that Donnan, the war god of the dwarves, would recognize. It lets him know that I'm fighting in his name and I could use a little help in the battle. Same goes for the death rune on my axe. It’s a constant request to Donnan to help me split skulls in his name. So runes aren't magic. They're religious. It's hard for some folks to understand that, but that's the way it is.

Sometimes they work and sometimes they don't. I'm still here and I've split many a skull. The runes didn't work so good for my wife and son. Maybe there ain't any gods. Maybe it's all just coincidence. It ain't for me to decide.

The writing machine doesn't have any runes. It doesn't run on steam, nor can I hear any clockwork or gears. It just clicks along as I speak, quiet when I don't. It's sort of eerie, and I never saw a machine that was eerie before now.

No, this is something different. It stinks of magic.

I hate magic. It's what got me into all this trouble in the first place.

I guess I'm gonna have to take the elf's word on it just being a machine. If I don't take her word on it then my story won't be told and I think it needs to be told so that folks will know that I didn't start the durned rebellion on purpose. I didn’t make the prophecy, nor do much to fulfill it. Anyway, who ever heard of a prophecy where the guy the prophecy’s about ain’t supposed to do nothing? I just did what I did and it happened. I sometimes wonder if I didn’t do what I did if it would still have happened. There weren’t any guidelines, so who’s to know. I just always seemed to be at the wrong place at the wrong time, or the right place at the right time, depending on who you ask. Another coincidence, I suppose.

Time's also what got me into this mess. I wound up far away from where I was meant to be.

I know, it sounds confusing, but it really isn't. Once I get started on my story, it will all come together. I hope it will. I never have been much of a storyteller, but this is what happened.