Dangling by a Thread by Conrad Lawrence

Everyone’s heard of phone sex, but how about email sex? Find out just how steamy this form of communication can be as this couple play out their secret liaison in the middle of a board meeting, with one partner hiding beneath the table. How far can they go before they’re caught?

Don’t Mind Me by Landon Dixon

Many people have a little bit of a voyeur within them, but for him it’s been a passion since his early teens, ever since he caught two of his schoolteachers taking part in some extra-curricular activity... He has spied on a wide variety of sexual encounters in all kinds of environments, and while some might think of it as “immoral”, he sees it more as a case of “mutual satisfaction”.

He’s always hated flying – all that waiting at the airport, bad food and pressure headaches. That is until he meets air-stewardess Tia, who is willing to go beyond the call of duty to ensure this passenger has the flight of his life. It’s amazing how quickly you can forget your grievances at the prospect of joining the mile-high club.

Gilbert and Sons Menswear shop is on the brink of closing when the idea strikes the manager, Mr Johnson, to boost the store’s profits. The brainwave? At this clothes shop, you don’t only get suited and booted – you get an extra special service thrown in. And the success of Mr Johnson’s sexy scheme all comes down to his special “blend” of coffee, which sees to it that everyone profits, one way or another ...

These stories have been previously published in Sex and Satisfaction 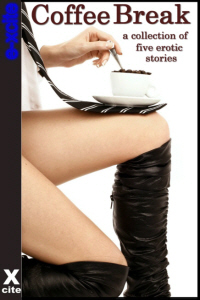 My movements caused the bowl to slip from my hands and spill the hot fluid on my chest. Before I could gasp Tia instantly pulled out a cool wash cloth and began wiping my chest. Any thought of pain was instantly removed. She leaned close enough to press her nipples on my arm. I told her I was okay but she insisted I unbutton my shirt.
‘I have to check for burns,’ she replied and before I knew it, her deft hands had most of my chest exposed. Her noble fingers glided over my bare skin before she pressed her palm against my chest, leaned close and commented how fast my heart was beating.
That was it. I gave Tia a light kiss on her beautiful lips and told her she was the reason. She smiled, took my hands and pressed them between her sexy breasts. I could feel her heart racing as fast as mine. She kissed me, this time opening her lips and probing my mouth with her tongue.
Her breath tasted like honey. She gasped as I ran my other hand over her stockings until I reached the bare skin of her thigh. She responded by gently scratching my nipples with her beautiful red nails. I cupped her breasts. Her nipples turned hard against my palms. She stood up, unzipped her skirt and turned to reveal a tiny black thong dividing her luscious buttocks. After removing her blouse, she began stroking her bare, tanned breasts and those lovely dark nipples. She murmured with pleasure, then eyeing me thoughtfully, pushed back her seat, turned her back to me and crouched on it. I had a full and glorious view of her lovely ass. It was more than I could take. I stood behind her, cupped both her cheeks with the palm of my hand and slipped my finger in her wet, inviting pussy.