A trip to a swamp believed to be haunted is intriguing to Anya and her friends, but when they arrive at their campsite they sneak away from the group to check out the swamp before the others. What they find is disturbing, to say the least. The pale, yellow green water looks sickening and there are bodies in the swamp. After this discovery, along with moans in the night, the rumors of a haunted swamp and the zombies within it are a little more believable. 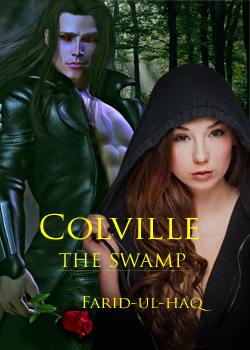 “The swamp, according to my knowledge, is haunted,” said Cassandra, adjusting her hood. “It is said that many years ago the people in the forest lived happily, but one day because of a heavy downpour, the lake, which is now the swamp, flooded, drowning the people. It is said that every fifty years the people of the swamp, the ones who drowned, come out as swamp monsters and hunt for living flesh. They capture people and drag them down into the swamp with them, not to wake up again for another fifty years.”

“Creepy,” said Susan, rolling a strand of her hair around her finger. Curious, she searched for some more newspapers or any article regarding the disappearances. Going through some links, she found a site telling about a downpour occurring in the area where the swamp was located. “September 1855,” read Susan. “A heavy rainfall occurred near the quiet town of Colville, flooding a lake and drowning most of the inhabitants living near the forest.” The idea of a haunted swamp was intriguing to her.

*****
They went deeper into the forest. Anya looked at the huge trees and began to get an eerie feeling. The swamp was huge and it looked sinister. The pale, yellow green water looked sickening. Tying her hair into a knot, she inched closer. Reaching the swamp, she looked into it. The water seemed still. She strained harder and then screamed. The rest of the group came towards her.

“There are bodies in there,” she whispered, closing her eyes.

Looking at each other, both Tabitha and Cassandra bent down to take a look.

“She’s right,” said Tab, getting back up and trying to remain calm. “I just saw a face in there.”