With his life in tatters, Vietnam veteran Richard hits the road hoping to find work where he can forget his past and leave his demons behind. He finds work on a rundown farm owned by a woman with two children whose husband is away at the war.

Rebecca struggles with everyday life, including an overbearing father-in-law, a retired army officer, the Major, who objects to Richard’s being there and wants him gone. Things are not what they seem as Richard soon learns and the marihuana crop he discovers while repairing fences leads to further drama. In the midst of this, a love affair develops between Rebecca and Richard, adding more problems to his growing list.

Cattle agistment and crop harvesting go hand in hand for the cowboys sent to collect both, but danger looms, and before threats can be fulfilled, Richard decides to act. The demons return and in a fiery conclusion which sees the crop destroyed, the cowboys on the run, and Richard in a life and death situation and in need of answers…

Where is Rebecca? Is she, along with the children, safe? Has he once again been fooled and betrayed by a woman? 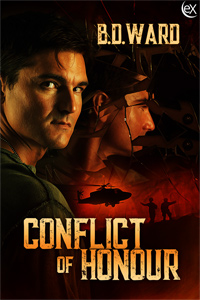 “What’s a young colt like you doing in a place like this?” the elderly storekeeper asked, eyeing me off as though I was some sort of rarity.

The leather riding boots, dirty jeans and leather jacket shouldn’t have been enough to cause that reaction. It must have been my ruffled hair. The name Angus was embroidered on his shirt pocket, and that was all I had by way of introduction.

He nodded warily. “That’s what they call me.”

“I didn’t mean here exactly, but they said at the garage you might know of something in the area.”

He scratched his head. “A large number of the young men are away at war at present, which makes things pretty hard in a farming community, but there’s bound to be someone needing help.” He thought for a moment. “How come you’re not over there fighting for your country?” he asked suspiciously.

“It’s not a fight for our country. We shouldn’t even be there,” I told him bitterly. I knew it was a topic that was creating heated debate all over the country.

“You’re not one of those draft dodger fellows?”

“I’ve done my time over there. What about work?” I asked. I didn’t want to elaborate any further on my time spent in Vietnam or defend my actions or thoughts on a war that had turned my life upside down.

“You seemed to come out of it unscathed.” He looked up and down at this stranger. “Is it as bad as they say it is? Are we winning?”

“Work! Can you help?” I asked. I didn’t want to get into a debate with someone that knew nothing except gossip he’d probably picked up at the pub.

“Not really. If you leave your name and a contact number, I can ask around for you. There might be something turn up,” he suggested, but the look on his face told me it was most unlikely and he was most disinterested.

“I’m travelling through. No sense in hanging about if there’s nothing. Thanks for your help,” I said, turning and walking out of the shop, back toward the garage where my motorcycle was parked. I could feel his eyes staring at me as I walked, and felt compelled to turn and stare back, or wave, but resisted. Perhaps my attitude was not the best, but then when your life goes from on top of the world to grovelling in crap, you don’t really feel like being friendly and neighbourly to everyone you meet.

Before this useless war, jobs had been plentiful, but now it seemed even the country towns were suffering as much as the cities—not that I was a city person, but since my conscription, I’d lived nowhere else than on the outskirts of large towns or cities. That was until I was shipped out with my battalion for the steamy jungles of that place they called, hell.

Australia, they say is, the lucky country? I guess I was one of the lucky ones. At least I came back in one piece, a few scars to remind me of my time there, not wanting to recall anything about the place, and I certainly didn’t want to tell what I knew to some shopkeeper who knew nothing more than what he read in the morning paper—government propaganda. Since I’d arrived back, I’d found so much that had been written about the war which painted a different picture to what was actually happening there, but I was free of it now. All I wanted was to get my life back on track.

It wasn’t exactly on track before the war. I had planned to be married. She was the girl of my dreams. Eleanor was voluptuous with the broad smile and outrageous humour who could match me or any of my mates, drink for drink. I had a good business I’d started from scratch, but all that faded away the day I received my call-up papers. I had thought about registering as a conscientious objector or anything to delay the inevitable but was told by many I was wasting my time and it was better to go and get it over with. Eleanor and my best mate Tim would look after things while I was away, and when I got back, things could return to normal and life would resume—or that was the plan…

Easy for those in authority to say. I was taken halfway around the country for basic training and then to what seemed a world away. Instead of building things, I was now blowing them up, using a rifle instead of a hammer and taking orders instead of giving them. The occasional letters I wrote to Eleanor were always replied to, informing me how things were going at home, but as the months went on, the letters became fewer until they finally stopped altogether.

I wasn’t all that worried—more annoyed by not knowing why. There was plenty to do around the base or on patrol, and there was no better place to talk out your problems. There was never a shortage of drinking mates or tall stories, but there was also that worrying edge that each day could be your last. Although that was never talked about openly, it was always in the back of your mind. Skirmishes and ambushes were always on the cards and the VC were quite proficient at setting booby traps in the hope of eliminating one or more of their enemy.

But that was war—kill or be killed, and the first time you press your finger on the trigger and see the flesh tear and blood spurt from your victim reinforces that. You knew it was either him or you. That doesn’t make it right, but it gives you the satisfaction in knowing that at least this time, you were lucky. He was your enemy. Someone you didn’t know, someone who was there to do the same job as you, only for the other side. The enemy. Kill or be killed was a remark used often, especially on patrol, always there in the back of your mind…haunting you. Making you suspicious of every noise, every movement around you. Keeping you on your guard.