A historical romance novella based in Wales in the 1800's by Toni Sands.

Sea, sky and smugglers’ coves … paradise for some but despair for beautiful Rebecca. Her father plans to marry her off to a tyrant. Intrigued by a soothsayer’s words, she tumbles at the feet of bad boy Jac, an apprentice smuggler, good with women and horses. Desire mounts as powerfully as Rebecca’s determination to rewrite her destiny.

Is the local witch the answer to her prayers? Mystic Morwenna is Jac’s ex-lover. Can she be trusted? Midnight at Half Moon Cove sees scavengers and power-hungry barons struggling for supremacy. The lovers must face greater danger before innocence is traded for passion in the sandy cove where they first met. 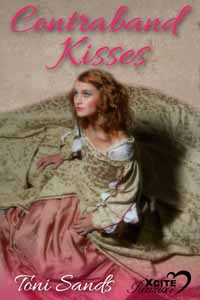 On the golden crescent visible at high tide, a horseman cantered towards the headland. An emerald green bandanna tied back glossy black hair from his face. His white shirt ballooned as he rode, muscular thighs gripping the horse’s flanks.

Fingers laced, two young women giggled their way across the dunes above, to scramble into a sandy bowl, sheltered by swaying grass and sea thrift.

‘Biddy’s only following your father’s orders,’ said Catrin. ‘He wants you to make a good marriage.’

‘It’s not fair! Marrying me off to someone who’s a hundred years old.’

‘Born back in the last century. You do the sums! Once I’m in the old goat’s clutches, I shan’t see you any more. As for Biddy – she’d chop off her head rather than leave my father. I’ll have no one to talk to.’

Catrin looked down at the dry sand trailing through her fingers.

Rebecca’s eyes narrowed. ‘You know something, don’t you?’

But her cousin’s attention was elsewhere. On the beach below, a horseman had appeared. The horse’s hooves kicked at a wave, sending watery diamonds into the air. Catrin pointed him out to Rebecca and they watched him vanish around the headland.

‘He rides well.’ Catrin smoothed her skirt around her legs.

Rebecca bent her head towards her cousin’s ripe-corn mane of hair and whispered.

‘Why? I know what you really meant. And you still haven’t answered my question. I might be forced to tickle you.’ Rebecca knew her companion would confess to murder once subjected to this torment.

Catrin upturned her palms. ‘I’m to be married too.’

‘You and I will be wedded and bedded by summer’s end. It’s what’s destined for young women like us.’

Rebecca scrambled to her feet. We’ll see about that.’ Her defiant cry merged with the mew of the gulls fussing overhead.

The girls retraced their route. Laughter drifted down to the shore where the horseman had turned to ride back towards the opposite cliff. His lips twitched at the glimpse of snowy petticoat peeping from skirts swirled by the breeze. His gaze followed the two slender figures climbing the path snaking through the dunes until it dipped sharply, swallowing the tops of the girls’ heads.

‘Pretty,’ he told his horse. ‘A fair milkmaid and a fiery goddess. This peninsula shows promise. Maybe I’ll enjoy my stay with my uncle even more than I anticipated.’ He pressed his thighs against the animal’s flanks. ‘Come,Sofia. I need sustenance and so do you.’