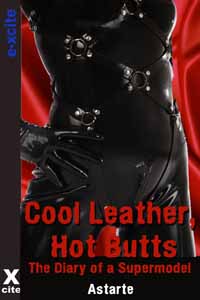 Meeting up with Harry was one of the stranger episodes. It was to change my vanilla lifestyle and set me on the road as a decadent dominatrix. At the time I was the Third Floor fashion model at an exclusive Knightsbridge department store near Sloane Street in London’s West End. It was a springboard job modelling the store’s womenswear. It kept me, paying my half of the rent for the basement pad I shared with Hyacinth around the corner in Lowndes Square until we got ourselves a top agent and hit it big on the catwalks. On that chilly day in February, Hyacinth was away on a photo shoot and I was on my way out of the store after a long day modelling outfits from the spring collection. Passing through Lingerie, on my way to the elevator, I noticed this tall, distinguished looking gentleman sporting a Gieves blazer and Household Cavalry tie. He was standing at the boutique panty bar, presumably buying something sexy for a lady friend. That’s a lucky girl who has him put them on her and then take them off again, I thought idly. I heard him ask the sales assistant whether she had something in oyster satin, trimmed with lace. Classy tastes too, I thought.

While she was busy dealing with his request, I saw him snaffle a pair of lace-trimmed silk knickers from a pile on the counter and hurriedly stuff them into his blazer pocket. I stopped and pretended to look at some retro-seamed stockings at the next counter. He bought and paid for the knickers the assistant showed him with plastic and, thinking that nobody had noticed his “buy one – get one free” gambit, he made his way to the lift.

I followed him, intending to point him out to the store detective at the entrance. But then I had a much better idea. I shadowed him out of the store into Knightsbridge and, as soon as he was out on the street, I was right behind his sorry arse … His arse was mine! He was a good looking, sexy bastard, with fair hair, beautiful blue/grey eyes, and doubtless a “high goal” demon on the polo field at Windsor. I stepped up to his side, flashed my store ID tag on the inside of my jacket, and said, ‘Sir, you will have to come with me. I saw you nab the knickers you have in your blazer pocket!’ He was thoroughly demoralized with that and looked at me so pathetically I was almost sorry for being the unfeeling bitch I am!

He said quietly and calmly, ‘Isn’t there something we can work out about this? I am a Guards officer and if this gets out I’ll be cashiered.’

‘You should have thought of that when you decided to rip off our store! We know your name from your credit card so just come quietly with me, please.’

I took him by the arm, and before he had time to think I had whisked him round the corner into Lowndes Square and down the steps to my basement flat. He looked so bleak and pathetic, and I was giggling inside. He was obviously a closet transvestite who just loved the sensual feel of fine fabrics next to his skin – and hell, I understood that! I guided him into my pad, closed the door, locked it, and turned to him with a wicked grin of satisfaction. He was appraising me with his blue eyes twinkling now. Then I was all over him.

He was laughing with relief and looking at me with admiration and growing lust.

‘That was a cruel way to make my acquaintance!’

‘I haven’t made your acquaintance yet, but in just a few moments I’m going to,’ I said, as I gave his lip a playful nip. He laughed out loud then and kissed my mouth like he knew what in the fuck he was doing. I liked it! I knew I would, though.

I led the way to my bedroom, peeling off my coat as I went. He followed me in and I turned to face him. I was up real close and personal, breathing in the heady fragrance of his Joop Nightflight cologne as I loosened his Guards tie and eased him out of his jacket.

‘You nearly gave me a heart attack on the street in front of the store! What made you think of pretending to be a store detective like that, you little bitch?’

‘I had a go to hell attitude overtake me when I saw you stealing these knickers,’ I replied, jerking them out of his blazer pocket and dangling them enticingly beneath his nose.

‘I was going to scare the pants off you for the fun of it, then I saw how edibly handsome you are and decided to play you and reel you in for my pleasure instead. Now, strip and do exactly as I tell you! Let’s see what you look like in this pretty pair of knickers that you stole.’

I enjoyed the view as he stripped off his clothes. He was in marvellous shape and I could see by his ramrod military erection, which rose stiffly to attention under my appreciative gaze, that I was going to have a wonderful night instead of eating alone. I looked at this Adonis, whose name I didn’t know, and thought he was more shocked now than when I’d tricked him into coming here with me. He put on the sheer black silky panties with lace trim that barely covered his throbbing manhood and turned toward me. I reached for the silky bulge of his rock-hard cock and stroked it through the straining fabric. I could feel his cock quiver as I ran my lacquered nail up and down its heated shaft. He bent to kiss my mouth, giving me his tongue to suck. And I sucked it. God, did I suck it!