Anxious for adventure and the chance to prove she’s not the spoiled socialite her friends and family believe her to be, Victoria Moore buys The Circle Cat ranch, rolls up her sleeves, and begins the repairs that will turn the ramshackle place into the best dude ranch in Arizona. One thing she didn’t plan on was a dark, down-on-his-luck cowboy smashing into her barn. But when he does, she turns the problem into an opportunity. Armed with limited experience, but a lot of determination, Victoria sets out to get what she wants from the wandering cowboy.

The last thing Lang Thompson wants is to get tangled up with a woman. Especially one who’s used to getting what she wants when she wants it. He knows what rich girls like her expect and he isn’t interested in playing games. But he’s no match for Victoria’s hardworking determination and sexy brand of innocence. 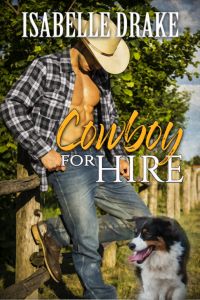 Sure, Victoria had written marriage off, but spending time with a man like this one, on her own terms, well…that had plenty of appeal. She had promised herself some fun and this guy had fun written all over him, in big, Las Vegas style, neon letters. The muscles in his jaw flexed, hard and determined. Maybe not fun, exactly, a good time—yes, definitely that.

He shoved his hat back and the tiny trace of a smile lifted his capable, kissable mouth. The gaze of his liquid brown eyes met hers, causing a jolt of electricity to skim across her nerves, swirl down her stomach and settle between her legs.

“Listen. All I want to do is straighten out this barn problem, Miss—”

“Marana.” She lowered her voice, “But you can just call me Victoria.”

His eyes narrowed. He leaned back, efficiently rolling the glass in his competent hands. The harder she tried to win him over the more he pulled back. If she weren’t so frustrated, she would’ve laughed.

Never one to give up once she got settled on an idea, she ignored his lack of cooperation and kept leaning toward him invitingly.

He shifted sideways. “As in Marana Construction from Phoenix?”

“That’s my father’s company,” she replied, putting emphasis on father. That easy life she’d eagerly left behind was a thing of the past. She’d come to The Circle Cat to make her dreams come true and have some unrestricted fun in the process.

All she needed was the right man…and fate may have just delivered him.