Steamy action that breaks all rules. Lust can drive people to do crazy things – including breaking the law. Even fraudsters and thieves need a little love and a lot of sexual satisfaction sometimes. Whether they’re behind bars or still at large, these fun-loving criminals get a kick out of being very naughty and it’s going to take a lot to persuade them back on to the straight and narrow. 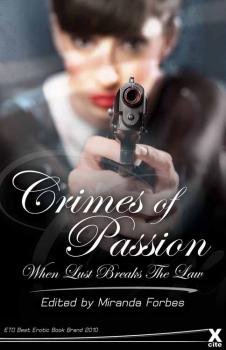 An evil grin stretched across Presley’s face as she stared around at the dungeon that had been created inside the bedroom of the cabin. A complicated series of pulleys and ropes hung from one corner, a bed with high wooden posts and a bare mattress sat in the middle of the room and one wall contained a series of hooks from which hung a variety of wicked implements. Presley whistled in appreciation at the sight of the master craftsmanship of the whips and elk hide floggers; their artistry and elegant brutality was obvious from where she stood and she turned her head to look at the manacles hanging from iron loops driven into the opposite wall and the St Andrew’s cross. The bright red rolling tool box that stood at chest height interested her greatly and she strode to it, opened a drawer and felt heat fill her lower belly at the sight of needles, cocks in various shapes and sizes, tubes of lube and everything else anyone would need to do a scene.
Humiliation crawled along Kelliann’s veins as she stood watching Presley tour the dungeon. She was used to people being afraid or scornful of her proclivities but she had never invited anyone who was not a play partner to the cabin and the sight of an unknown person examining her things and, by extension, her sexual appetites, made her feel ashamed and a little frightened.
‘Nice whips, who made these? I have never been able to find a 24 plait this supple.’
‘Axel,’ Kelliann said and then she really heard the question. Lust bit into her as she watched Presley take the whip from its hook, turning it over and over in her strong capable hands, trying it out by giving it a few practice throws. The cracks that resulted made goosepimples erupt on Kelliann’s skin. That Presley was a well versed whip player was obvious and she found herself wanting to kneel, to bow her shoulders and allow that whip to play along the sensitive skin of her back and shoulders.
Presley felt the first surge of endorphins flooding her system as she held the gorgeous and well broken-in whip in her hand. It felt perfect there and she turned to see Kelliann looking at her with an expression of utter longing on her face. That was all it took. The two of them exchanged that one smouldering look and then Presley was in front of Kelliann, her free hand ripping at the soft T-shirt that Kelliann wore, tearing it away. Her silky red bra followed; it fell to the floor and Kelliann shivered as the air stroked her nipples, the sensitive skin of her belly. Kelliann yanked her own jeans down, tangling them into her shoes and then kicking everything off.
The whip stroked the air gently, landing softly on Kelliann’s shoulders but not biting, warming her up and turning her on so much that she cried out and pressed one finger to her clit.
‘No,’ Presley snarled and yanked Kelliann’s finger away. Slick, hot liquid bubbled from between her thighs and Kelliann whimpered as she stood still, letting the whip stroke her faster and harder. Her ass cheeks quivered as it landed, leaving behind red lines and making her sob out loud with pain that was being translated into pleasure by her nerves and skin.
Presley put the whip away and dragged Kelliann by her long hair to the bed. She tossed her onto it and asked, ‘Are you ready to be fucked?’
‘Yes, please fuck me,’ Kelliann whispered and Presley grinned, grabbed the rope-laced cuffs at the four points of the bed and restrained her prisoner with her arms stretched overhead and her legs locked up and drawn back until her knees were close to her chest. Kelliann felt her hips jerk involuntarily as she was spread wide and open, as she was caught and held in a position of vulnerability.
‘How pretty you are all tied up,’ Presley said and went to the tool box. She returned with a blindfold, a small cock and a very large one, a tube of lube and a black leather slapper. Kelliann felt desire override her being; she wanted to be fucked, wanted it so badly she could do nothing but obey the woman who was holding her prisoner.
She cried out again and again as fingers invaded her pussy, opened her and rubbed furiously against her swollen, aching clit. Her thighs were struck with the slapper as her clit was manipulated, causing her to beg for more, and she choked on her words as a large cock was slid between her lips.
‘Suck it, pretty, because it is going in your cunt and you want it to be all wet so you can take it all.’