Two young people meet and fall in love in Southern California during the idyllic 1960s. Being together is bitterly opposed by the young woman’s father and the young man’s mother. A sudden death in the girl’s family and relocation to Europe by the boy’s family threatens to permanently end the relationship until the young woman decides to fight back. 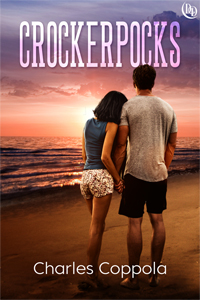 Bradley Morrison Crocker sat in an old, but very well padded, Adirondacks chair. From the back porch of his home, he watched a pick-up game of touch football being noisily contested. Demoted from player to spectator, he nursed a sore ankle with a hastily prepared ice bag. The remaining participants in the game include his wife, children, assorted spouses, and eleven grandchildren.

His youngest daughter, Angelica, broke free from the ragged line of scrimmage and ran downfield, apparently unseen by anyone on the opposing team. Completely in the clear, she raised both her arms, trying to get the attention of her team's quarterback who was frantically scrambling around trying not to be touched. When he finally saw her out of the corner of his eye, he stopped and launched a long arching pass. She back-peddled quickly, only to get tangled in her own feet and tumble backward in an uncoordinated heap.

"Nice pass, Crocker," Angelica yelled at her older brother. "Throw it a little higher next time."

"Nice catch, Crocker," Frank fired back. "We'll get you a ladder next time."

"I'm declaring an official injury time out," she announced, limping off the lawn, rubbing an imaginary bruise on her left buttock.

Her older sister, Adela, chimed in. "No time outs unless we get to see the injury, Crocker."

"I'll show you mine if you show me yours, Crocker."

"On second thought, never mind." Adela's face contorted with the thought. "I saw enough of that skinny rear end when we were kids. Doubt it's changed much."

Walking back to the huddle, her eldest sister, Antonia, hollered, "I hope it smells better than it used to."

His daughter made her way across the well-manicured lawn to the picnic tables sitting near the porch. Bradley was worried about her. She had settled into a series of low paying, futureless jobs instead of taking advantage of the bachelor’s degree in history she had earned in college. He worried about her lack of ambition to go out and make something of herself. Most of all, he worried about the men she chose to be in her life and the several misguided romances she’d stormed through since returning home from school. He saw her latest boyfriend in a more favorable light than he had the rest and secretly hoped he might jump start the spirit in his daughter that she seemed to have lost.

She raised the lid on one of the many coolers, reached in and retrieved a fresh bottle of sports drink and an ice cold can of beer.

"Ready for another?" she asked.

"Yeah, more first aid for my injury. Bring it over."

"Nah, if I needed a doctor for every little ache and pain I get nowadays, I'd have one living here."

"Mom said it's the second time you hurt it this week."

"Sometimes your mother worries too much about me."

"She says it a dirty job, but someone's got to do it."

"Yeah, I guess." Bradley looked out at the game, searching for his wife. "How's that young man of yours?"

"He's back in New York. He’s been gone for a month already."

"Long distance romance sucks. There wasn’t time to include me in the plans he made to get to New York. The only contact we’ve had were occasional telephone calls and a single weekend trip back to California he was able to squeeze in.”

"Yeah, that's one word for it." He arched one eyebrow in admonishment. "There are others that sound a little better."

"Sorry, Dad." She accepted the rebuke. "It's just that it's been one thing after another with us. First his mother doesn't like me. He had that accident, and then he gets this promotion and has to go to New York. It seems like we take two steps backward for every one step forward. I guess I'm getting a little tired of trying so hard. It seems like no matter what we do, something new always comes up that keeps us from being together.”

"Your grandpa used to say enough is enough when he got angry."

"Yeah, he didn't get angry too often, but when he did, he would always say enough is enough. Is that about how you're feeling?"

"Yes, I guess that pretty much describes it."