Time is running out for the survivors of the Great War. If Halie does not find a way to sort truth from lie—Earth and Tereus, the second world that has been trapped in earth’s gravitational pull, will collide and leave mankind at the not-so-tender mercies of the ghouls and phantoms—the invasion has already begun.

The order has been given—to locate and acquire the psychics or psis as they are commonly known—willing or not. Black ops agents of both factions are scouring the streets and labyrinth of the abandoned buildings of the inner cities, kidnapping any of the competent psis they can reach.

Desperate to preserve their freedom, Halie and her talented friends are barely a step ahead of the acquisition teams, but they cannot escape the hordes of ghouls and phantoms already haunting their world.

Fearing for their safety and freedom, Halie and her friends have been very secretive about their abilities. As the most powerful and talented of the group, Halie now finds herself the focus of the attentions of two handsome agents, one of the alternate dimension, Tereus, the other of her own Over-world, each begging for the help only she can give to avert the impending disaster, each believing his own need is greater. Both court Halie’s love—but which sees the woman he professes to love, and which sees a means to an end?

The fate of two worlds hangs on Halie’s choice. 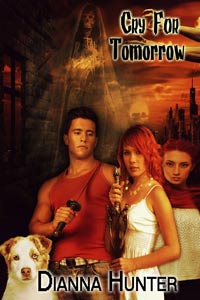 I was gasping for breath and nearly blind from the dust when I finally broke the grip of the swirling winds of a passing wind-devil. I stumbled into the dubious shelter of an alcove at the doorway of an abandoned building. Huddled against the wall, it took me several minutes to catch my breath and blink away the gritty tears that were blinding me.

When I could finally see well enough again, I leaned out to check the progress of the mini-tornado dancing down the center of the street. With the street clear for as far as I could see, I resumed my hurried walk along the sidewalk. Shivering, I was trying to tug the collar of the light jacket I was wearing up around my neck to keep the cold off when the rattle of stones from somewhere across the street sent me diving into the deep shadows.

My mind instantly went to the man that had bumped into me when I was leaving the last bus stop.

I’d been aware of his steps behind me when I started walking. I’d taken some side trips down a couple of alleys going the wrong way before circling back. I had been pretty sure I’d lost him—now I wasn’t so sure.

Pressing my back against the cold concrete, I slowly slid down the wall until I was as small a presence as possible and waited, listening. I was beginning to think this was just another case of my paranoia working over-time when a sudden shift of shadows at the skyline of the building across the street caught my eye—and another sharp gust of wind brought the musky scent of a big cat to my nostrils.

Afraid of giving away my position, I waited motionlessly for the cat to make its move. My patience was rewarded when a tawny body slid from the dense shadows and stood silhouetted against the golden light of the setting sun.

I couldn’t help a small shiver of fear as I watched the lion. It was both rare and dangerous to encounter one so deep within the city, but I couldn’t help admiring the beauty of the animal’s sleek form. I’d heard the rumors claiming that more of the electronic barriers erected around the cities to keep the assortment of pre-disaster beasts out of the streets and away from the residents were failing. With the increase in sightings and even attacks on humans, it was looking like the rumors were true.

Both the lion and I jumped when a half-rotted rubber tire that had been leaning against the side of an abandoned auto about fifty feet from me rolled into the street. I was more alarmed by the appearance of the man darting from cover behind the auto than by the presence of the cat. I was totally relieved when the man raced down the street in the direction I’d just come from.

The lion landed on silent feet only a few yards from where I was crouched, and leapt in pursuit.

“Better you than me,” I whispered with a shiver. It was difficult to feel pity for a man that had obviously been tracking me. I shook off another shiver and resumed my journey.

I tried to pick up my pace, but it was difficult to make really good time. The streets through this part of the city were no longer considered worth the cost of the repairs needed to maintain them.

I was two blocks deeper into the city when I encountered one of the chasms that were constantly appearing in the streets. This one was wider and deeper than most, which was why someone, probably one of the local residents, had erected a narrow bridge of rope and planks over it. I didn’t remember this one, but then it had been weeks since I’d been in this part of the city, and small earthquakes and tremors were an everyday fact of life.

I paused in the shadows and studied the open area around the bridge. Everything looked quiet but still I waited, listening until I was sure the way was clear before daring to put a foot to the bridge. I’d made it as far as the center of the gently swaying walkway when a sound from the depths of the fissure caught my attention. Freezing where I was, I listened until I located the source of the rattle and shuffle of movement. Leaning against the heavy rope guideline for support, I stared into the misty depths. Just enough light filtered down to show me a tangle of broken pipes, metal cables and tendrils of the persistent green vines that seemed determined to overwhelm the whole inner-city. I tightened my grip on the rope when a small earth tremor shook the ground, shaking the blackened bones of a skeleton into view. The surrounding buildings and piles of debris shivered and the cable-wrapped skeleton twitched, its arms rising and its bones twisting as if it danced within its raiment of metal.

Unimpressed by either the small quake or the skeleton, I patiently waited for everything to stop moving. Like most people living in the city, I hardly even noticed the tremors, but evidently something residing in the chasm was not as unconcerned. When a good-sized chunk of concrete broke off the ragged edge of the fissure and tumbled through the tangle, there was a shrill, excited squeal.