In the beginning, the highest god Onoris established laws governing Naor and gave the order for all to fight against the darkness. However, there are those deceived by the promises of Hodgorn, the lord of darkness, who let the darkness in their souls. They become cursed beings; the gods of lightness turn their faces away from them and close the gates of the bright palace upon them. The cursed ones are left in Naor and torment those who wish to protect their souls from eternal damnation.

However, evil does not want to let the lightness triumph, and it looks for its victims everywhere. It may chase a nobleman who is seeking his fortune in the severe lands of the far north; it may hide in the fog that envelops the mountains and the estates of a great lady. It can also wait patiently for centuries under the scorching desert sun for the opportunity to seize a weapon that will enable it to enslave the creatures of lightness.

But it all depends on Onoris’ creatures whether their souls will be devoured by the darkness or remain unblemished by evil. 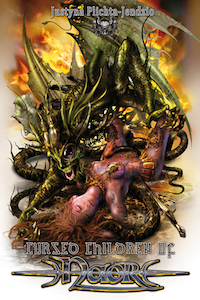 In the hunters’ camp, there was a seeming peace. Most of the men, exhausted after their difficult travels, were sleeping. Some of them rested on leather beddings next to the small fires lit out of dry sticks collected from the remains of the bushes that jutted out into the snow. Others lay by the smoldering qudliks filled with seal oil. The rest were in the hurriedly constructed igloos carved of blocks of snow. Only those hunters who had large sleighs, the proper number of dogs or those who moved in groups rested in the tents, which were made of tanned leather scraped out of fur. The tent was a luxury—for many, a superfluous luxury. On small sleighs capable of holding only small loads of fur, were redundant ballasts that occupied a lot of valuable space that otherwise, meant for collected leathers. The hunters were able to sleep, covered with the leathers of the furbearing animals they killed.

Apart from the commodities, there also had to be room on the toboggans for the chests that contained food for the animals, weapons and other essential things necessary to survive in these extremely harsh conditions.

Near the tents, the dogs were sleeping, buried in the snow. Curled into a ball, they warmed the pits they dug themselves with the heat of their own bodies. They were gorged and sleeping peacefully, whimpering from time to time as if tormented by visions in their dreams. Nearby, the men who were supposed to watch the campsite were roasting fat slabs of meat on the small flames of the fires or on the kudliks. The men justly divided between themselves the seal they had caught that day. The dogs ate the tasty remains, together with the skin. After the end of the hunting season when they didn’t have fresh meat, they were satisfied with pieces of dried meat or rusks that were hard as wood. Therefore, they had eagerly shot the careless young seal. When they headed towards the northern countries covered with snow they took dried fruits and nuts with them, but those delicacies were quickly at an end.

When returning to the south a few days prior, they had crossed the border behind, which was the land of eternal snow. The land where they pitched their camp was free from the fetters of snow for several short weeks in late spring and summer.

As the men waited for the meat to roast, they shared their impressions from this year’s hunting, which had been successful. During the summer and mild winters, animals gathered a lot of fat and kept in excellent shape almost to the end of winter. The furs that the hunters carried were of excellent quality. Now, when it was getting warmer, the animals’ hair was thinning and there was no point in further hunting. Soon, the thawing would make the most of the routes impassable until late spring when the sun dried the ground.

In order to hunt on these terrains, they had to buy permission from the princes supervising these lands. Their castles were located on the fastest and the most convenient routes, and the princes’ soldiers checked people who were using them. Obviously, the magnates controlled the terrains that were closest to their properties while the rest belonged to the Inemarui tribes living there. The tribes lived in icehouses, leather tents, or dugouts depending on how far to the north they dwelled. They hunted seals, whales and furbearing animals, and possessed reindeer and dogs. Some of them lived in houses made of the bones of giant whales covered with leathers, branches, and mud. The others had houses on sleighs pulled by reindeer.

These people never submitted to the princes’ power. When the princes sent their armies to try to enslave the Inemarui tribes, the troops were resoundingly defeated.

The princes’ castles were dependent on the supplies of black rock used for warming the rocky buildings. The Inemarui cut off its supplies and the supplies of other products to the fortresses, which quickly froze, and the hunger forced their lords to surrender. Since then, peace reigned, and the princes themselves benefited from the services of the local scouts who controlled the people coming to these terrains. Both furs and gold often lured people. The mines of this valuable ore belonged to the princes, though various prowlers still came there to obtain this yellow metal. Runways from the south who wanted to escape justice hid on these broad terrains and attacked the fur hunters and gold seekers who rinsed the valuable ore from the rivers’ waters. The Inemarui, who knew these terrains perfectly, as well as how to survive there, quickly caught the runaways and delivered them to fortresses. Here, they were paid with products that made their survival easier, such as metal knives or arrowheads that replaced their flint and bone items.

Despite these people’s arrival, the lands remained unspoiled and wild. One could wander weeks and weeks without encountering another living soul apart from animals. There were no cities, and people didn’t settle there for good. After two or three years, they typically returned to the south, though rarely with larger savings. Although fur and gold provided quite good income, the costs were immeasurably bigger and absorbed the lion’s share of the property. Only a few hunters returned there for more than a dozen years. However, in order to make more money, the ability to survive in these extreme conditions wasn’t the only thing one had to possess. Being a perfect tracker, hunter, and favorite of the gods who guided the animals towards the hunters’ bows was just as important. On multiple occasions, animals wandered on different trails, and hunters didn’t see a single living creature. Then, when they ran out of food stocks, they starved to death. The bodies of these unfortunate hunters, who after eating their own dogs grew faint while walking south, were found later. However, the gods were graceful this year.

The hunters had managed to reach one of the fortresses, which was, at the same time a commercial and resting spot.