Jake Cullen, a disabled teen novelist, is contacted from the great cyber beyond by a person who calls herself Miranda.

It turns out that Miranda isn’t a hacker, but an AI program, a free-roaming, independent program that can go anywhere and do anything it likes within the confines of cyberspace. Jake finds her creator, Doctor Helena Schreiber, and receives the greatest gift—a way to link up to her creation, Miranda.

Jake enters the internet and finds a cyber world that’s much like our own, but more so. He and Miranda go exploring together, and also find out they’re more into each other than they thought possible.

While all is fun and games at first, trouble looms in the form of Marvin Throckmorton, Schreiber’s former employer. He’s aware that Doctor Schreiber has created a sentient program, and he wants it.

To that end, he sends his enforcers to coerce the information out of Jake, and they attack him and threaten his life and the life of his mother.

What he does not know is Doctor Schreiber’s ultimate goal—to make her creation more human. Jake also has a goal—to survive. With Miranda’s help, he finds a way to fight back and discovers just where he truly belongs. 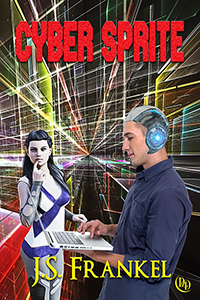 My mother’s voice interrupted me, just when I’d come to the penultimate line. Varksor, the hero of my latest piece, was about to deliver the death blow to Shardoor, his hated archenemy. I’d written, “This is for the honor of my—”

Varksor would have to wait a little longer to get his revenge. I saved what I’d been working on since five this morning, shut things down, and hoped that my computer wouldn’t go haywire.

Things had been happening all over the world for the past two months, strange things, as in computers being taken over by what the experts called an unknown virus that they dubbed the World Wide Disruptor.

No one knew where it came from. Said virus neither stole nor corrupted any data. It merely sent the user to other sites, hid messages and then restored them, and put up different screensavers.

“We urge people to check their apps,” the announcers urged. “Debug your programs, install new anti-viral systems if you have to, and don’t save any sensitive information on your computer. Use a flash drive.”

Sound reasoning, although I had nothing of a sensitive nature on my computer, only story files. That was it.

I ran-limped to the shower to hose myself down, and while doing said hosing, thought about school, that bastion of higher education. For me, it was a necessary evil. The experts said it would teach people how to study.

They also said school would teach me how to get along with others.

Cue the second, “Sure, they did,” comeback.

Finally, those so-called experts, who were only expert at convincing others they were experts, said school would help me to make friends, friends for life, and…

Well, no, not really.

It hadn’t taught me much, except how to memorize and regurgitate facts on paper, which would then be graded and filed away and used when it came time for me to go to university, assuming I had the grades to begin with.

My homeroom teacher, Ms. Harrison, a hard-bitten, cynical type who could have been forty or sixty, with a weathered face that had been beaten down by life and poor students, had informed me of that fact after my mid-term tests last November.

“Jake, this is your junior year. You need to get things in gear, not only for this year but also for your senior year. You’re doing well in English and not much else.”

She spoke slowly, framing each word carefully. Thanks. It made me feel wanted—not. I wasn’t deaf. I had a form of dysphasia, which meant I couldn’t speak well.

Credit a tumor for said impediment. Up until the age of sixteen, I’d been a fairly normal kid who liked watching movies, hung out with other kids from time to time—in short, normal.

Except for the headaches. They’d started coming a year earlier, when I’d turned fifteen. At first, they’d popped in for a visit once in a while, and then more frequently.

I chalked them up to school stress, tests, no girlfriend—that sort of thing. In hindsight, I should have seen a doctor, but all kids had a certain notion of being invincible.

That notion of invincibility got tested when my right arm went numb one day. No feeling, no movement, and only after massaging it repeatedly for an hour did the feeling return.

Did I tell my mother? No. I’d been overdoing things. Some kids were simply tougher. They had stronger immune systems. But I’d get past this. I would.

Wrong. One day during gym class, everyone gathered at the pool. As I waited for my turn on the blocks, a massive pain slammed me between the eyes. I felt my body go into the water, couldn’t breathe, and the next thing I knew, I woke up in the hospital.

“Brain tumor,” the doctor said to my mother once I’d focused in on everything. “Initially, we thought it might be a stroke.”

Strokes usually involved the left side of the body. Not in my case. Then the doctor showed us a brain scan—mine. A massive black spot sat smack dab in the middle of my brain, and the doctor indicated it with a slender finger.

“Apparently, it’s been growing for quite some time, but only now did it manifest itself.”

If only I’d sought help earlier. Too late now. There I lay, and my mother was nothing if not concerned. She’d asked, “What can you do?”

A sigh came from the doctor. “We can operate, but the tumor is situated in such a spot that he might lose his ability to speak normally. Even with the lasers we employ, there’s a risk involved. If we don’t operate, he won’t see adulthood.”

Some choice I had. So, we went ahead with the operation.

It worked, but it left me unable to speak for the longest time. My motor skills also got messed up, courtesy of the residual damage from the tumor.

Oh joy, oh bliss, I got to relive my toddler years again, relying on nurses to change me and get me moving.

Movement was key, and only through intensive therapy, practice, and hours spent forcing my voice and body to work, did I manage to get things going again.

All that had happened roughly a year ago. At my current age of seventeen going on eighteen, my speech still came out garbled at times, even though my thinking processes were unimpaired.

Eventually, I got back to school. I had to repeat my junior year, as I’d missed too many classes to make up. There was no sympathy for those people with my condition.