It is up to Leanna to rescue her brothers. Taken during a raid on her home world by the wizard Soltran, they have been added to the group of royals he has been kidnapping.

Because of her talent to Walk the corridors connecting the Chain of Worlds, Leanna is the only one who can effectively track the wizard as he treks through the Chain with his captives toward his home base and the sadistic ritual he has planned.

When Lea’s appearance proves more of a handicap than she had expected, she decides to seek the help of a powerful sorceress who has promised her aid if it were ever needed. As a native of the world of Hades, Leanna bears too much of a resemblance to the daemons of legend to escape notice.

After a treacherous trek through a series of strange worlds, Lea gains the sorceress’s compound only to discover that she is away on a mission. Fortunately, her golden-bronze scales, and the pair of horns curving through her mane of forest-green hair do not intimidate the sorceress’ young charges for they are all witch-born as well. It takes some fast talking, but the young warriors are able to convince their guardian to allow them to accompany Lea in the sorceress’s place.

So it is that Lea leaves the compound in the company of Adrian who is a sorcerer in training and his companion, Jewel the fire-dragon, his foster sister, Mariah who is half-druid half-witch and her familiar, Ghost, the morph-cat and Howler, a young but already physically powerful werewolf.

Their journey is filled with exotic worlds and the dangerous creatures that inhabit them as well as the traps the wizard has left to keep them from his trail, but they are determined to bring an end to the wizard’s deadly rampage through the Chain of Worlds. 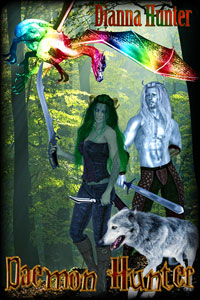