Evil lurks everywhere and only waits for the opportunity to hunt down and devour the souls of its victims. It is all the same to the evil whether those souls belong to slaves, peasants, monks, nobles or kings. Every mortal must make a choice whether he wants to devote his soul to perdition or save it, even at the cost of life. This battle has been fought for millennia and its arena is every corner of Naor. Anyone can become a warrior and his main arms will not be a weapon forged by smiths’ hammers but faith given by the gods of lightness.

This time the goddess of fate chose Isilai, a merchant’s daughter from the far south, who was dreaming of traveling and leading a free life. The goddess’s finger also pointed to Sainal, a mercenary returning from wars to her lands. Valbern, an aide to a powerful lord Kolbren, has not been spared the test as well. Each of them had to face the evil. Did they decide to sacrifice what was the most precious in their lives to keep their souls away from hell? 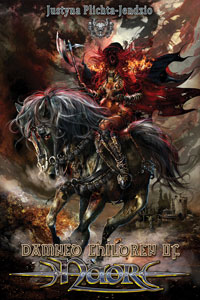 Twenty-one-year-old Isilai, in the company of Ngami, her slave and maidservant, was coming back from the temple on Naynram Hill about half a day’s journey from Ganarra, the capital of the kingdom of Carandia. In this small temple Isilai had made a gift for the successful return of her younger sister, Dibari, from her pilgrimage to the city of Dassab. Eighteen-year-old Dibari had started to menstruate recently and also had a dream in which the goddess Finieri embraced her in her arms. A local priest and a fortune teller interpreted it as the goddess’s request to receive a sacrifice in her temple located far south in the city of Dassab. Sir Kiburu, Isilai and Dibari’s father—although not a very God-fearing man—had decided it was better not to underestimate the explicit will of the powerful goddess. Although it was a risky expedition, Sir Kiburu sent Dibari with gifts and guards to the temple. The girl was to spend a few days with her aunt and uncle who lived in that city, and she was supposed to return in three days.

Worried about her sister, Isilai had decided to beg for the mercy of Dibari’s happy return. Early in the morning she went to the temple on Naynram Hill, where she immolated satika shells and a casket of precious spices.

Late in the afternoon, Isilai returned to the city. She and Ngami walked on the footbridge leading from one temple hill to another. The footbridge was erected on high stone pillars, so that during the heavy inflows of water from the Lidangao River it constituted the only connection to the mainland. Now the plain was dry, but the water was supposed to come soon. They could have gone under the bridge and taken the shortcut, which would definitely shorten their way, but Isilai wanted to admire the views. She did not come here often, as she usually visited the city houses of the gods.

“The inflow of water should start any day now. The wells in the city are almost dry, and it is difficult to get fresh vegetables,” complained Ngami. “The palace buys the best produce, and it is hard to choose something suitable to eat from what is left.”

“It is the time of fasting. The gods purposefully gave us such a special time so that we could cleanse our bodies and souls,” Isilai reminded her.

“Let the priests fast. It is their duty, they serve the gods. I have to eat to have the strength to work.”

Isilai just smiled. She was well aware of Ngami’s passion for good food. She could only guess what tortures Ngami suffered eating only cooked lentils and dried fish.

“Enjoy what nourishment you have in your bowl, Ngami. Many people are currently living on lizards or roots dug out near the drying ponds on the plain.”

After this remark, Ngami went silent. They walked in silence, passing groups of pilgrims heading to the temple.

Just before evening, when they were close to the city walls, Isilai felt strange. Her heart pounded vividly and a cold shiver went through her body. She was beset by a sudden anxiety that was rising with every passing moment. She stopped and looked around nervously.

“Has something happened, ma’am?” Ngami asked.

Isilai did not answer. She gasped quickly as though in a panic, unable to breathe. She grabbed her head and staggered, barely able to stay on her feet.

“Catch your mistress, she is fainting!” Ngami said quickly, assessing the situation.

A nearby slave caught her in his arms, but suddenly froze.

As Ngami watched Isali, she saw that her eyes, open and gazing skyward, were unnaturally shiny. Blue sparks glittered on her hair and white fire lingered over her forehead, resembling streaks of mist rather than flames.

“My gods!” the slave violently lay Isilai on the ground and jumped away from her like a meerkat from an attacking snake.

Ngami was astounded as well. “Run to Sir Kiburu and tell him what has happened. I’ll stay with Isilai.”

The slave did not argue but rushed away immediately.

Ngami squatted nearby, looking at her charge with helplessness and despair. Isilai was lying motionless, her eyes still wide open. The whites of her eyes were now a light silver color and her pupils were narrowed. She did not move, did not even twitch. Her whole body was surrounded by something like white flames that looked as if they were woven from a very thin mist that floated upwards. She was breathing shallowly but quickly, almost like a panting dog. Ngami was afraid to touch her because she did not know what forces had seized her mistress. She could only pray for her and wait for the arrival of help from the home of Sir Kiburu.

Far to the west of the kingdom of Carandia, in the foothills of the Mandruk Mountains, twenty-one-year-old Prince Tarragon watched with satisfaction as the servants brought slaughtered animals to his camp. His friend and cousin Prince Narsud, the son of the sister of the dead King Harubal, rode up to him and expertly dismounted.

“Good hunting,” Narsud said, assessing the results of the hunt.