It's the summer of 1978, it's the middle of the disco era, and dancing is one of the hottest trends. But 18 year old Junior has never seen the inside of a gay bar or danced with another man. His mother and father think he's just shy about meeting girls and that he'll grow out of it. His little sister drives him insane with her constant invisible companion, a talking dog named Elmer. All Junior cares about is meeting the right man and falling in love.

But when his parents buy a summer home in an exclusive resort community in the mountains of northeastern Pennsylvania, his prospects of finding love don't look too promising. His first day there he meets an aggressive, abrasive young woman who isn't the least bit shy about letting him know she wants to get to know him better. And the more he ignores her, the more she chases after him.

While his mother and father are enjoying all the amenities of the resort, and his sister is flirting with one of the waiters, Junior mopes around watching everyone else have fun. That is until he meets a handsome young dance instructor named Carlo who changes his life in ways he'd never dreamed were possible.

From the minute Junior lays eyes on Carlo, he knows he's in love. And in order to prove his love, he's willing to make personal sacrifices that no one else has ever been willing to make for Carlo... 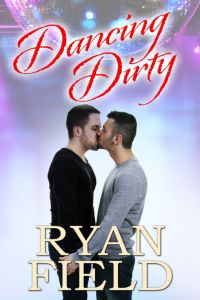 While they danced, Valerie bragged about how she was going to get her degree in business management and then get a real-estate license. She had that air of superiority that some small-town people acquired when they haven’t been exposed to anything better than what they already knew. Valerie said she wanted to follow in her father’s footsteps, and that they were already looking at other sites in the Pocono Mountains to start another gated community just like The Farms.

When she hinted that both resort communities would need a good full-time doctor, Junior smiled and said, “I’m going to specialize in infectious diseases. And I’d like to spend a good deal of my time working in third world countries, where doctors are scarce.”

This third world country thing had only been a thought and he hadn’t worked out all the details yet. Actually, Junior hadn’t decided on any specialization. But he wanted Valerie to know, in no uncertain terms, that he had no intention of becoming a general practitioner who spent his time putting Band-Aids on tourists in a second-rate resort community in the middle of nowhere.

“Do you have any hobbies?” Valerie asked.

She tapped his chest and laughed. “Be serious,” she said, with a giddy flirtatious lilt. “You know what I mean.”

He didn’t have a clue. Junior knew nothing, and could not have cared less, about pottery.