A searing paranormal romance of passionate love and intense hate.

Cassandra Lowry has a sixth sense. She dreams about a handsome man making love to her. He appears to need and want her. However, danger and evil surround him. Her dreams and visions are disturbingly real. When Cass drives south, her sensitivity warns her that something is not right. She swerves to miss a deer and her car ends up in a ditch. Chased by two country boys, she gets lost in the forest and spends a night exposed to the elements, only to be found the next day by her dream man.

Set in the modern South, this novel reaches back into a troubled family heritage. Two female ghosts, women from different centuries, haunt male members of the Hunt family. The heroine of this sensual gothic romance is young, just graduated from college, and alone in the world. Although in danger herself, Cass seeks to solve the mystery and end the curse that enshrouds the family while at the same time finding the passionate love of her life. 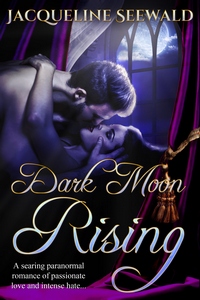 Cass became aware of something cool brushing against her forehead. Trying to reach the coolness, her fingers began to tremble. She managed to look up into the startled eyes of a young girl.

“No, at least I hope not.” The hoarse voice did not sound like her own.

“Don’t try to move around. I can see you’re hurting.”

Cass attempted to focus her eyes but a liquid haze had settled over them. Probably it resulted from the fever. Perspiration was trickling down her face into her eyes. She could barely see the girl who came to her through a gauzy mist.

Cass finally managed to see the girl—she was a teenager, petite and pretty, wearing a white peasant blouse with a flowered skirt. Even in Cass’s confused state, she observed the girl’s shimmering silver gray eyes and long mane of white-blond hair.

The boy stayed away and so she couldn’t see him very well, but she sensed that he was older than the girl, although probably not by much.

“Ask her who she is and what she’s doin’ here,” he said. By his tone of voice, she could tell that he was very angry.

“Please, some water,” Cass choked out. “I need a doctor.”

“You better go,” the girl said, turning to the young man. “It wouldn’t do having folks know we was together.”

The girl’s eyes seemed to dissolve mystically in elusive smoke as she watched her boyfriend leave. Cass could hear the engine of the sports car roar and then smelled burned rubber.

The girl turned back to Cass. “I’ll get you some help,” she said.

“You’ll have to bring someone back here. I can’t walk.”

The gray eyes were thoughtful. “Not many folks living in these parts. Farmland and forest mostly. No doctor, no hospital, not for a long ways. But don’t worry ’cause I can bring someone who’ll know just what to do for you.”

Cass wondered just how much the girl could be relied upon. There was something odd about her, something out of the norm.

“A town, is there one nearby?”

The teenager shrugged. “Shark Lake Junction, but you wouldn’t call it much of a town. There’s only the general store, schoolhouse, church, cemetery and a bar.” The girl tossed her long hair. “You’re resting beside Shark Lake right now. Just you stay here. I’ll bring back the fella I was talking about. John’s at the general store. He’s buying supplies. Colonel Hunt, he won’t much care when John gets back to the farm.”

“And you’re sure this man can help me?”

The girl laughed as if the mere suggestion of anything else were impossible. “If there’s anything worth knowing, John knows it.”

The childlike confidence reassured her. “Before you leave, can you get some water for me?”

“Sure enough,” the girl responded with a sweet smile. She walked to the lake, the sun turning the fair hair into a glowing halo, and returned with a dripping bandanna. “Sorry, it ain’t fit drinkin’ water. Lake’s only clean enough to swim in and then just barely.” She pressed the red-checked cloth against Cass’s forehead.

The water felt cool and comforting. Cass closed her eyes again for a moment.

Cass’s eyes flickered open. The girl’s expression was solemn; her features took on a faraway look.

“Don’t forget who’s saving you. No matter what folks tell you about me, don’t believe them. Least wise, it ain’t all true.” The girl spoke oddly, almost in a singsong manner. “Now don’t be lookin’ at me that way.”

“What way?” Cass asked in surprise.

“Like you’re thinking I’m crazy. I seen the same look on other people’s faces. Lots of folks think I’m not quite right in the head. Reverend Paley looks at me just the way you did. He’s says I’m possessed.”

“Why demons, of course. He says he’s seen devils take over my body with his very own eyes. I’m just a slave of Satan accordin’ to him. You believe in such?”

“I’ve never had any reason to believe in the existence of demons, but there are more things in heaven and earth than are ever dreamed of—”

“Then you do think I might be possessed?” the girl interrupted.

“Just tell me who’s in charge of you right now?”

“Good, then I’d very much appreciate it if you brought that person you were telling me about. I’m not feeling at all well.”

“Right quick,” she agreed with a sunny smile.

Cass’s eyes followed the girl briefly as she set off running through the forest. Then Cass began growing dizzy again. She fought it as long as she could, but eventually her eyes closed. By the time her head cleared, the girl was long gone. She tried to move, to sit up, but it was impossible. The fever and pain rendered her efforts futile. God, she’d never felt so weak. If only the girl were trustworthy. Relying on the kindness of strangers was risky business at best.

As the sun grew hotter, she began to feel peaceful, like a traveler nearing the end of a long journey. For a time, she thought of her grandmother. She could see her grandmother smiling at her, reassuring her. Cass watched the patterns of colored light dance beneath her eyelids, her mind floating on soft, billowy clouds.

“Her lips are parched.” It was a man’s voice, deep and rich.

She struggled to open her eyes. She felt the pressure of something warm and moist against her lips and realized with a sudden shock that she was being kissed.

A cool hand caressed her cheek; then powerful, masculine arms lifted her.

“I’ll set her down in the truck,” the vibrant baritone voice announced.

She managed to open her eyes partway, enough to see the man who had spoken. But now she knew she must have been hallucinating because the man she saw was the one that had been in her dreams, just as tall, just as handsome. She closed her eyes, filled with the reassuring image of his dimpled smile, and slept again.