Zero Dog mercenary Andrea Walker used to love fortune cookies—until the day she cracked one open to find a death prophecy. Of course, believing a fortune from a mass-produced baked good would be insane—until a berserker shows up on her doorstep claiming he’s been sent by an oracle to save her life. She must hire him or die.

But hell really breaks loose when the Zero Dogs are contracted to stop a ghost-summoning goblin’s plan to bring his Eternal Malevolence Carnival and Incredible Show of Evil to Portland, starring a company of ghost performers—clowns, acrobats, and nefarious balloon-twisting mimes. Meanwhile, Andrea’s abnormally shy succubus friend Tiffany seems to be falling for the mysterious berserker. Too bad a malfunctioning charm spell has the redcap goblin yearning for her as well.

Now Andrea must elude a death prophecy, discover if her new-hire berserker can be trusted, and avert the looming ghost clown apocalypse. Just another day at the office for the Zero Dogs. 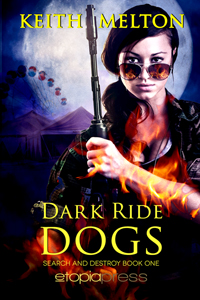